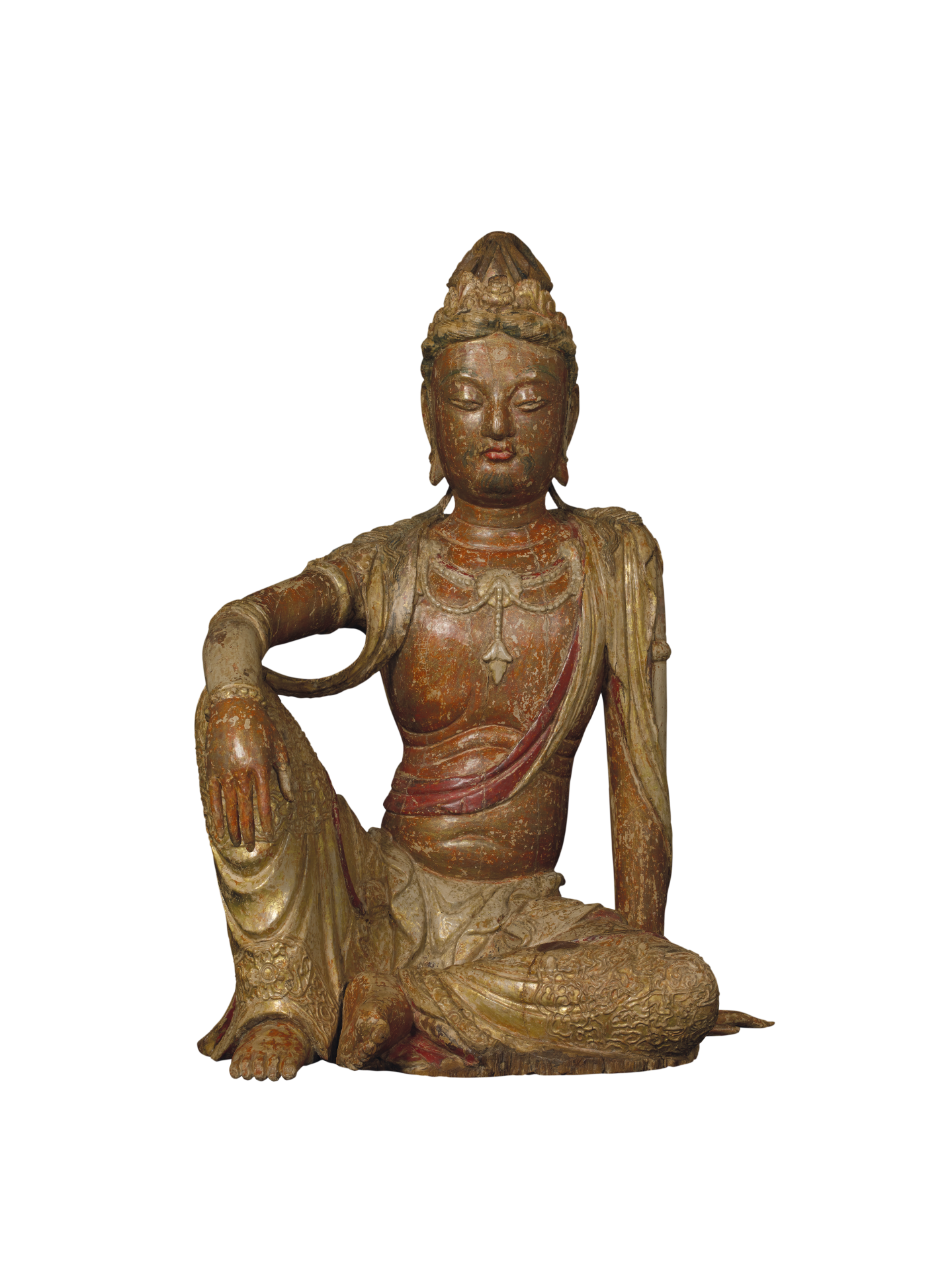 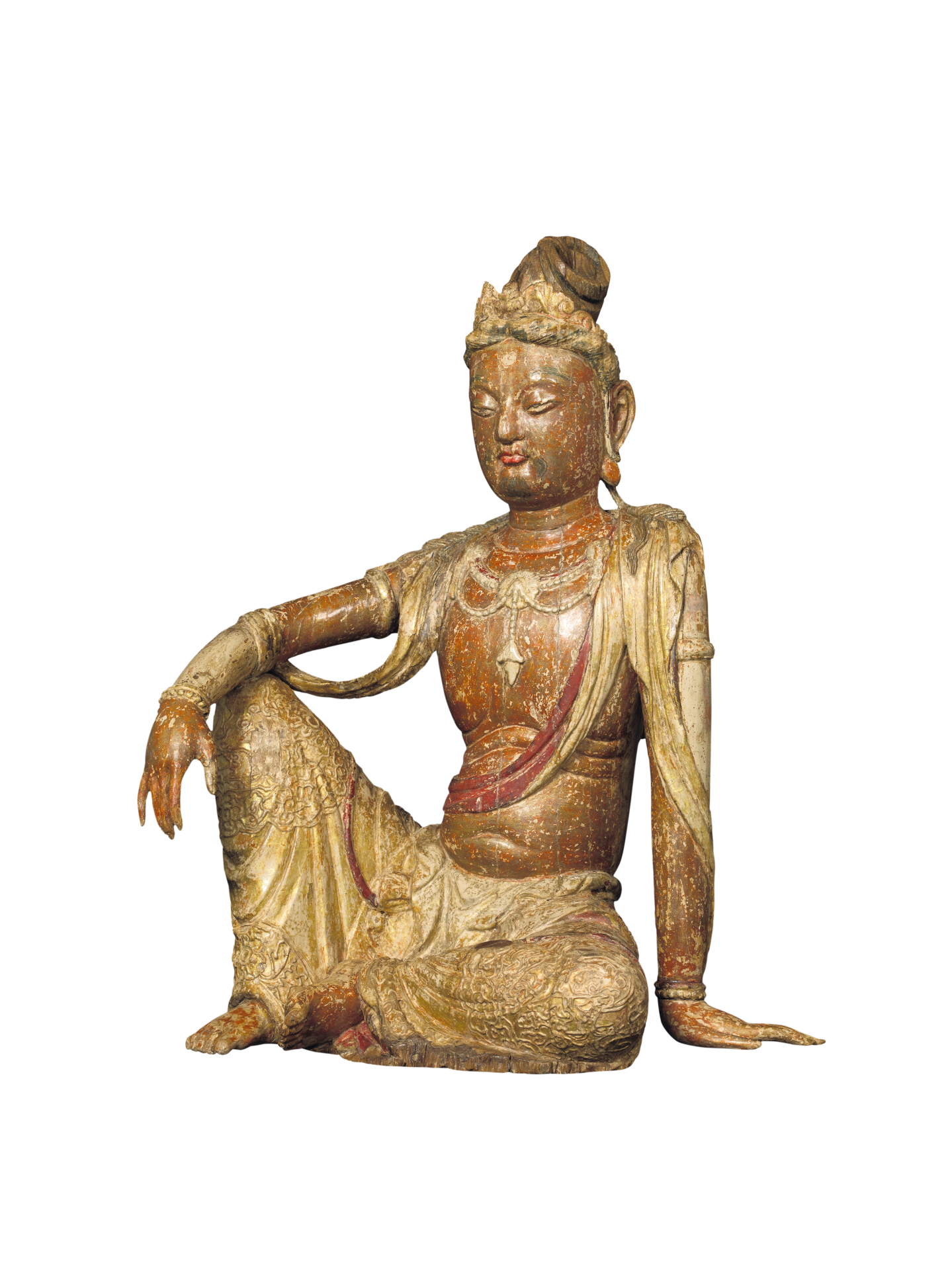 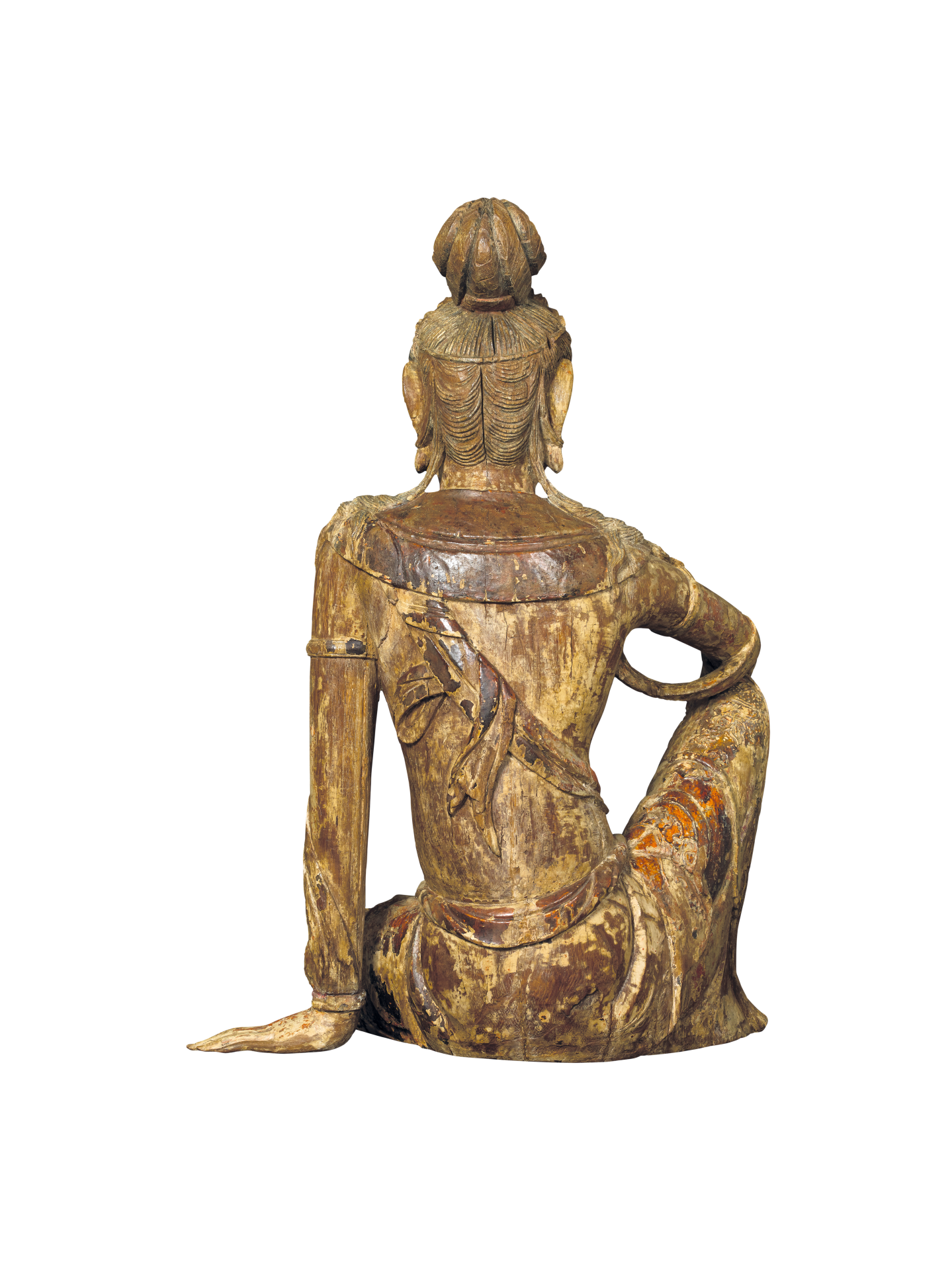 The iconography of Bodhisattva Guanyin varies tremendously. The one portraying Guanyin sitting leisurely with one hand resting on the rocky seat, while another hand placing on the knee of his bent leg was created during the Tang dynasty (618-907 CE) in the 8th century. According to the Avataṃsakasūtra, this was an important iconography in China from the 11th to the 13th century, commonly seen among Buddhist statuary of the Song (960-1279 CE), Liao (916-1125) and Jin (1115-1234) dynasties.

This Guanyin has an oval face with a squarish chin. His tall topknot is surrounded by a crown with cloud motifs, slightly damaged at the centre front and only Amitābha Buddha’s lower body image remains. The statue has close-set facial features, smoothly articulated brow ridges and eye sockets, forward-gazing half-open eyes with lifted outer corners, a small mouth with ruddy full lips, a squarish and slightly protruding chin, eyebrows and beard delineated by fine blue lines. He is seated with knees bent; the right knee pointing upward and the left knee pointing outward. The right elbow is resting on the right knee, while the left hand is providing support on the ground. The exposed upper body is adorned with strings of jewellery. The shawl goes around the shoulders and glides down the arms. A sash runs diagonally from the left shoulder to the right side of the abdomen. The arms are adorned with armlets and bangles. Moreover, the Bodhisattva also has a proportionately larger head, relatively narrow shoulders, a firm chest, a domed belly, a gently swaying body and a very spontaneous posture.

Guanyin’s limbs are finely executed, meticulously representing the undulation of the muscles. The palms are plump, firm and pliable. The fingers are sensibly and realistically sculpted, showing nuance of gesture. The statue also has a solemn countenance, a relatively low chest line and a plump torso that looks stout but not stocky, which are notable characteristics of Liao statuary. The long skirt around the lower body of the statue has undergone restoration during the Ming dynasty (1368-1644). The gelled appliqué cloud motifs highlighted with colloidal gold painting around the knees and bordering the hems are Ming additions.