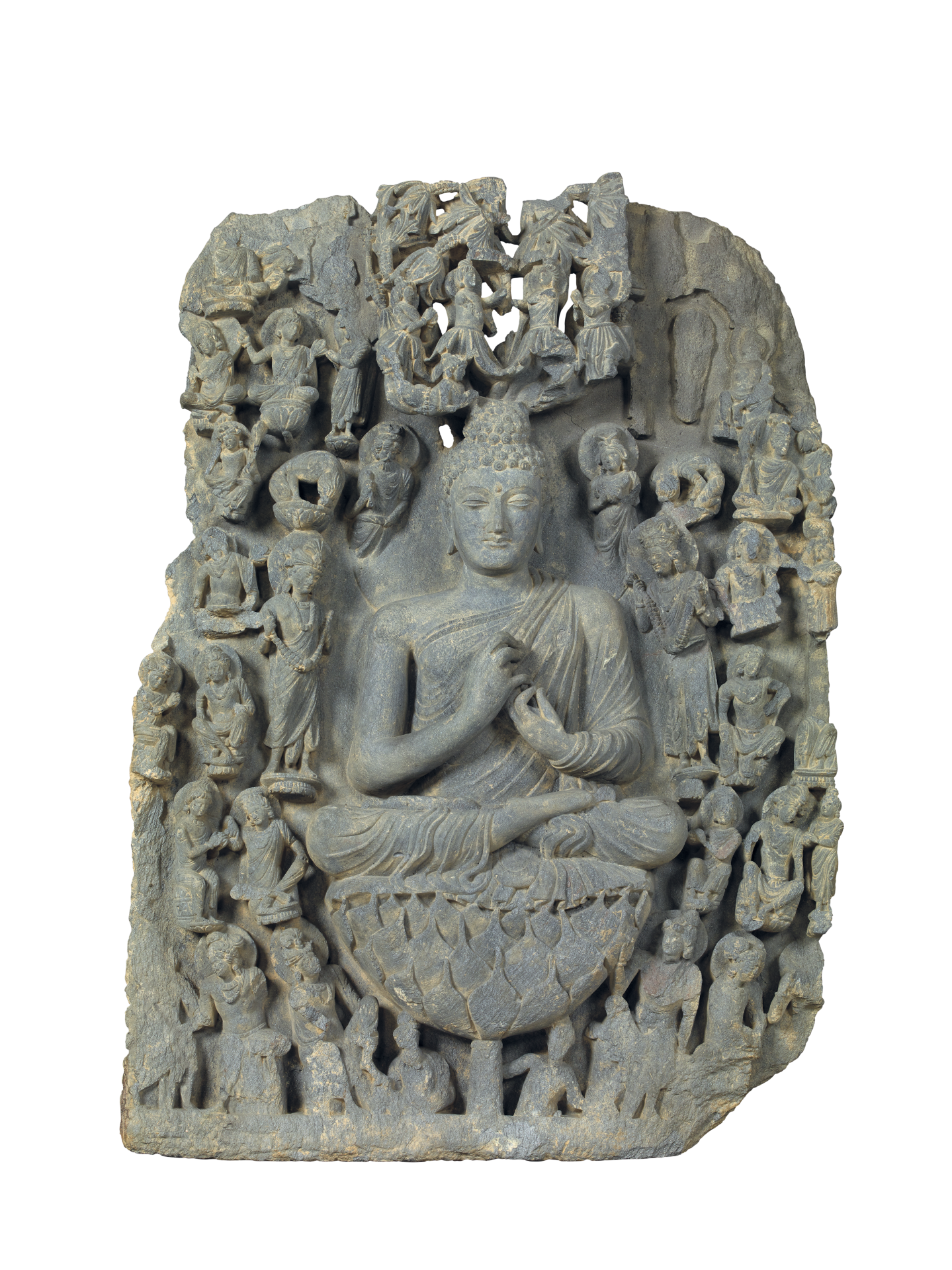 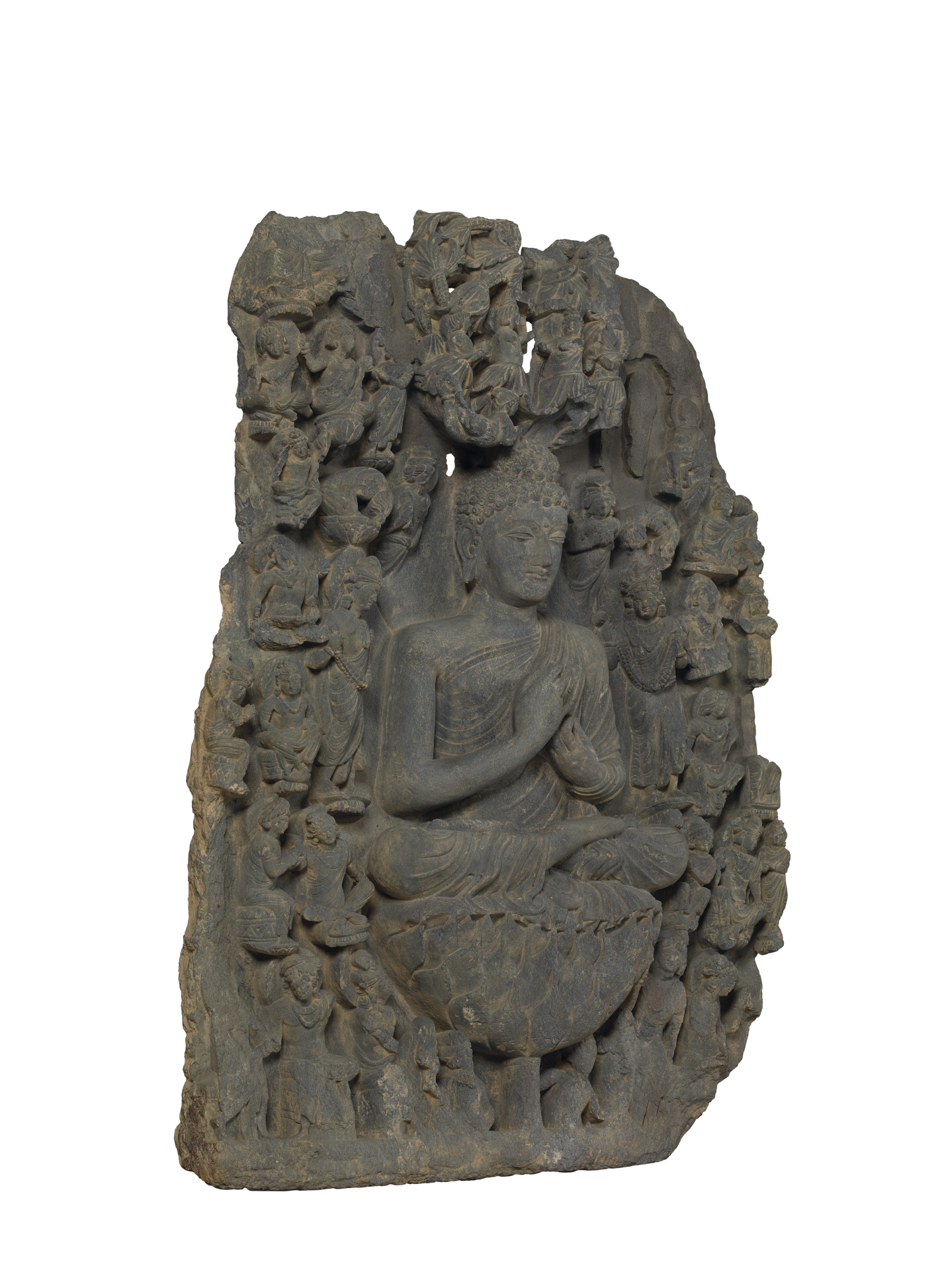 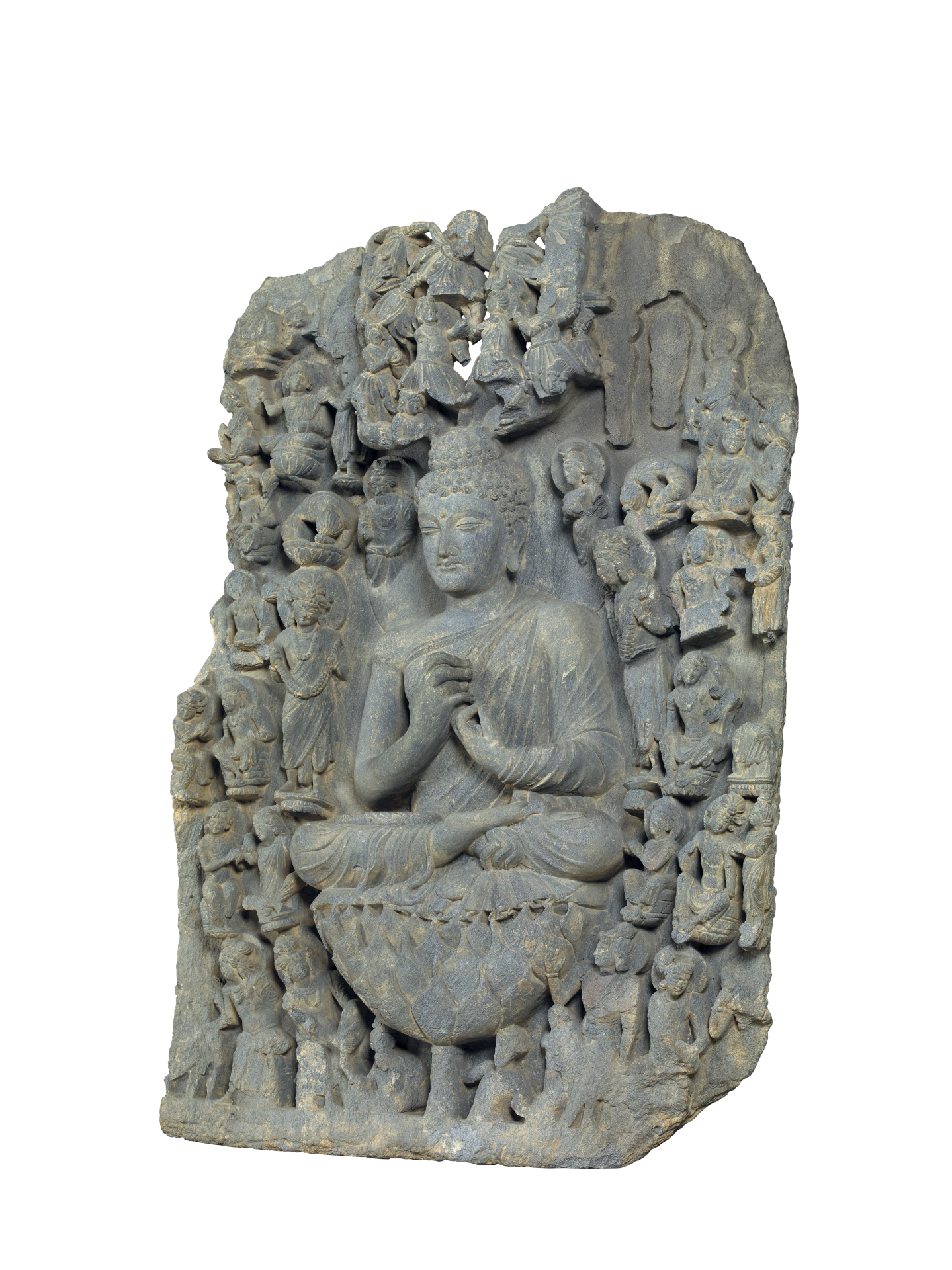 This rock relief portrays a magnificent preaching scene presided over by the Buddha. Śākyamuni, the principal figure with tight snail-like curls, is wearing a kāṣāya exposing the right side of his body, while seated with legs locked in ‘lotus posture’ (padmāsana) on a large lotus pedestal. His hands are displaying the ‘wheel-turning gesture’ (Dharmacakrapravartana mudrā) in front of his chest. He has pronounced facial features characterised by a high nose with small nasal tip, a thinner upper lip and relatively flat cheeks. His body is sturdy and strong. The drapery is fluidly delineated and thoughtfully spaced to echo with his body movement. The folds of varying depths are realistically modelled, and the ways they overlap and intersect accurately represented. The majority of the surrounding audience with a circular nimbus behind their head should be Bodhisattvas and other divine beings. The nimbus carved behind the Buddha’s head features two relief figures: the curly-haired and long-bearded Vajrapāṇi holding a vajra, and a female deity wearing a jewelled crown. The left and right acolyte Bodhisattvas flanking the Buddha are adorned with strings of jewellery and each holding a floral wreath. They are each standing on a circular pedestal in worship of the Buddha. The upper portion of the relief with flowers and foliage in the background is more seriously damaged. Some figures are missing but certain divine beings with leafy lower body as well as apsara flying maidens with joined palms are still discernible. The seated or standing figures flanking the Buddha in groups of two or three vary in appearance but most of them have large wavy curls. Some are looking toward the Buddha and listening attentively to his divine voice. Some turn around and lock eyes with their companion, in appreciation and inspired, while some even prostrate on the ground to pay utmost homage to the Buddha.

The static posture of Śākyamuni, the principal figure, forms a contrast with the dynamic activities of his audience. This has not only heightened the dramatic tension of the overall relief, but also allowed characters of different positions to be set out in hierarchical order. Rich and vivid details stand out from the complex groups of figures to illustrate with liveliness the diverse states of the divine beings attending the sermon. Preaching scenes of such monumental size are rare even among Gandhāran reliefs. The richness and diversity of the figures are particularly impressive. This sculpture is a sublime masterpiece of early Buddhist art.