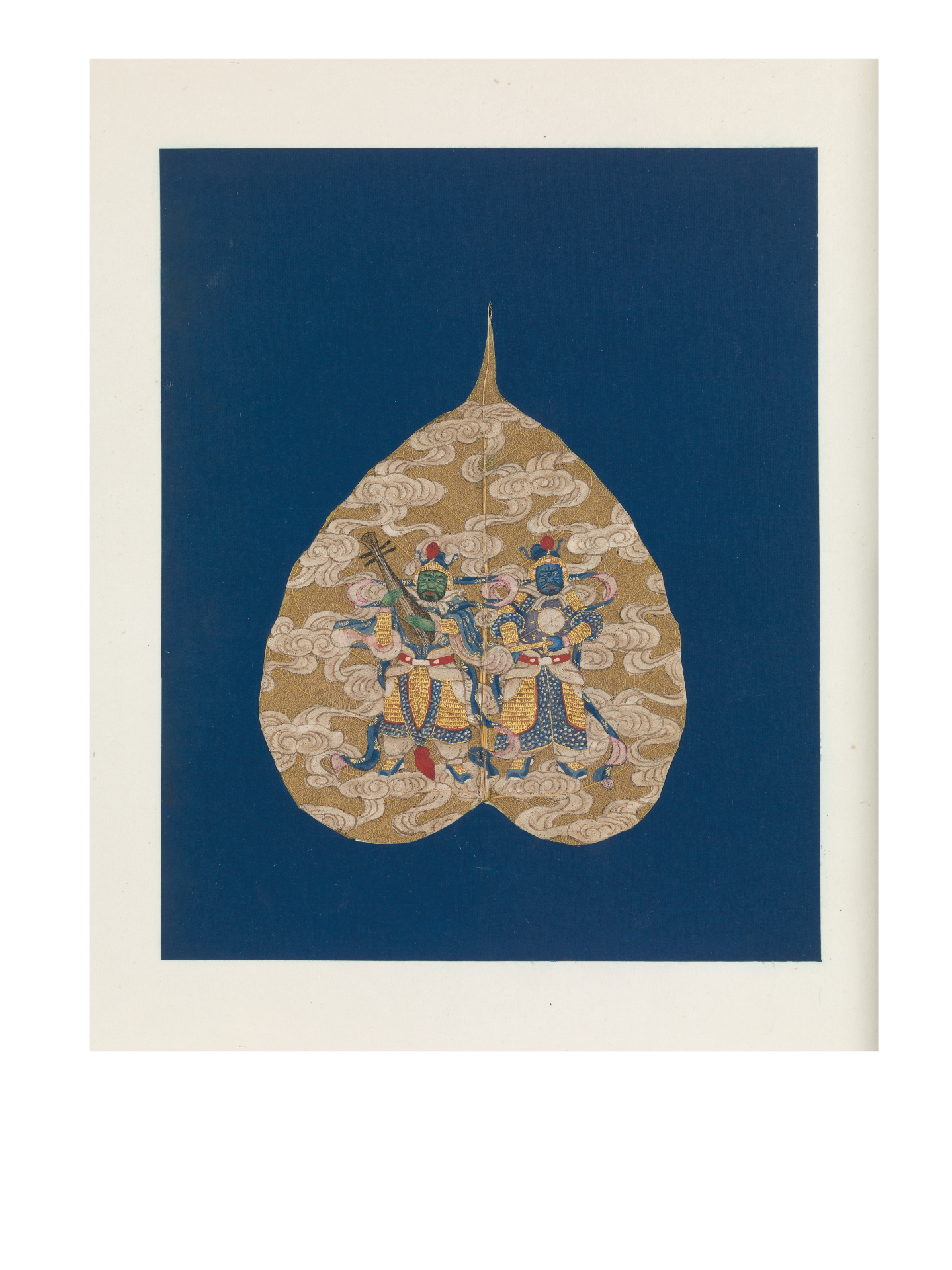 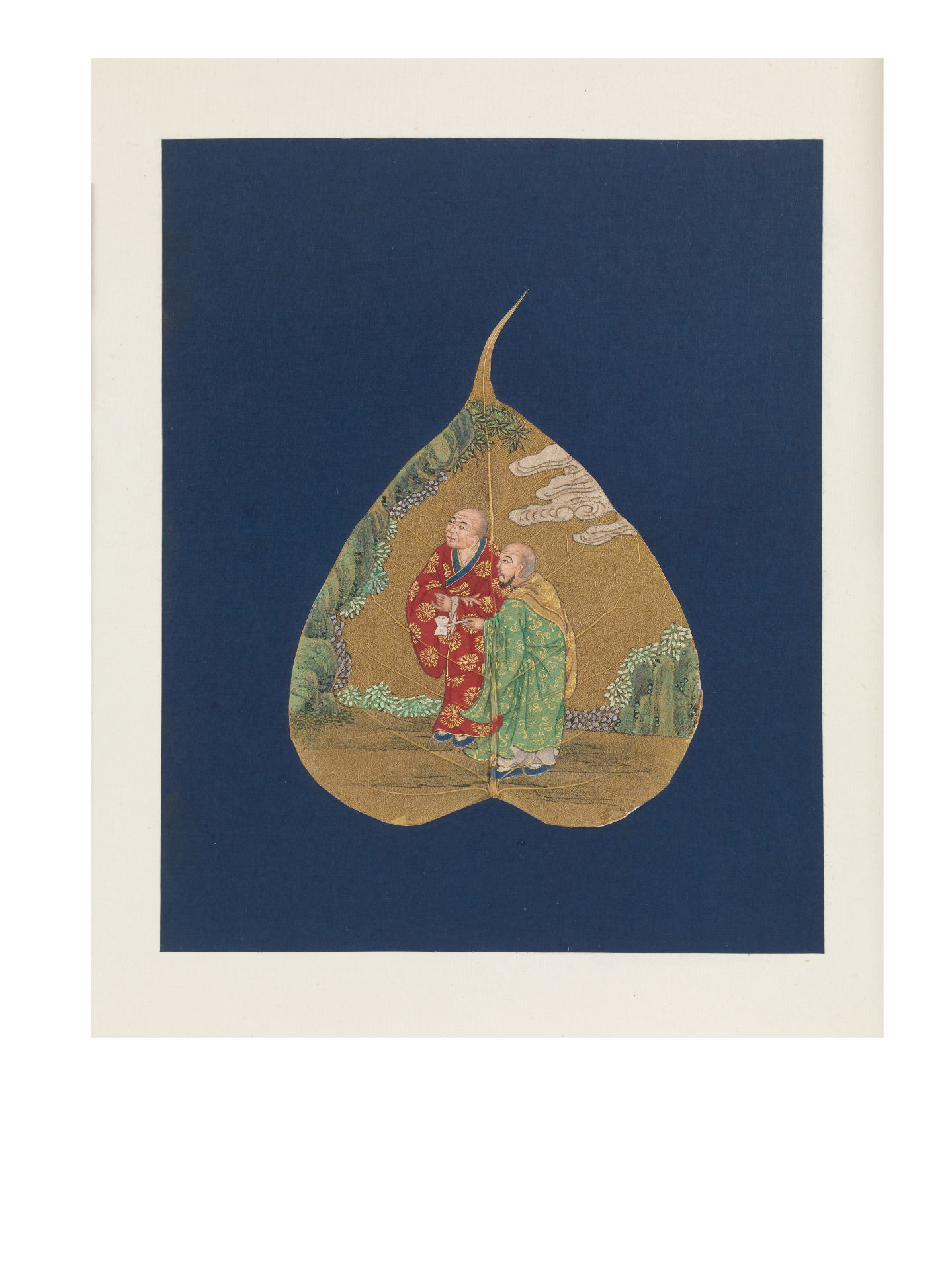 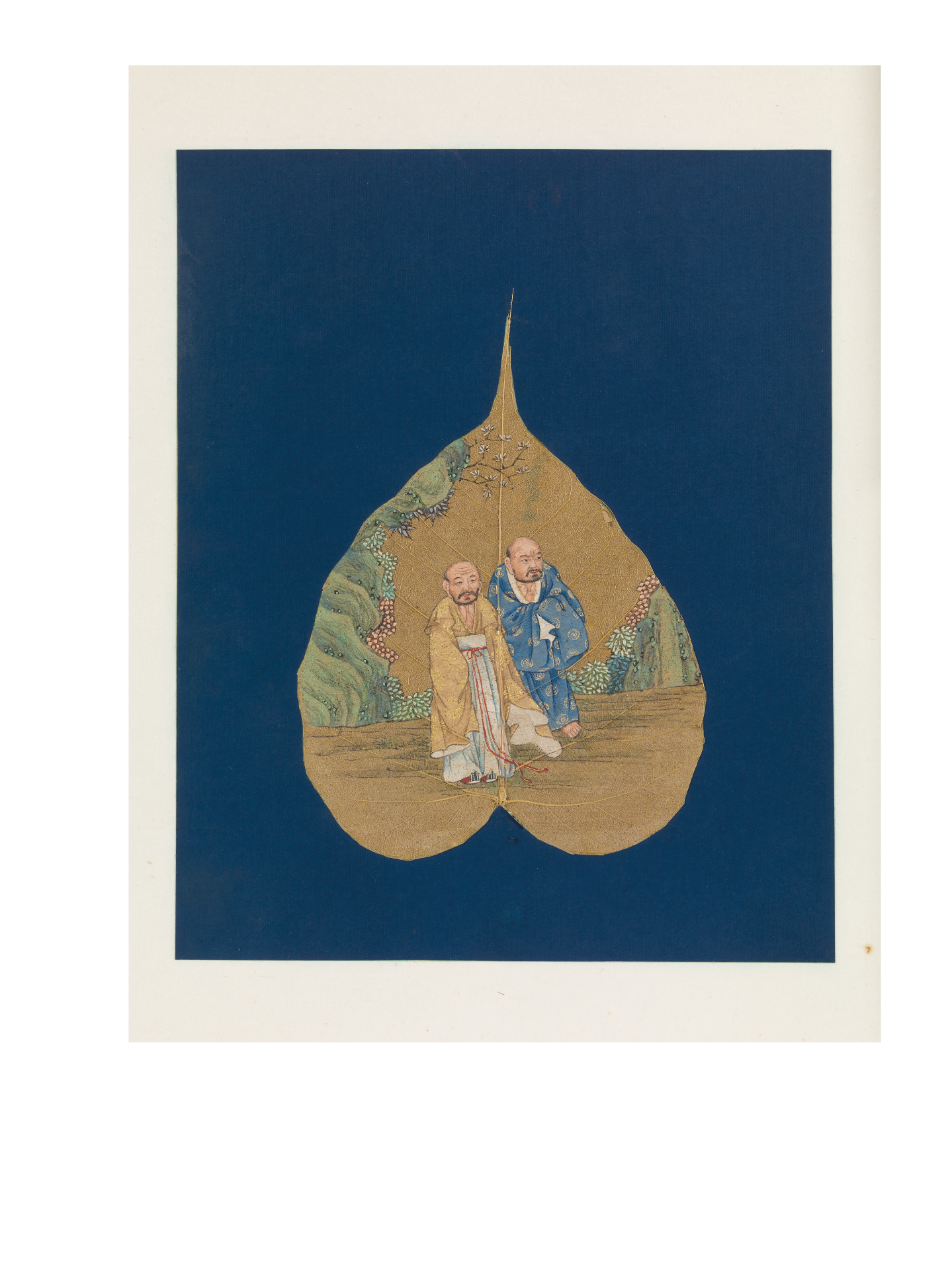 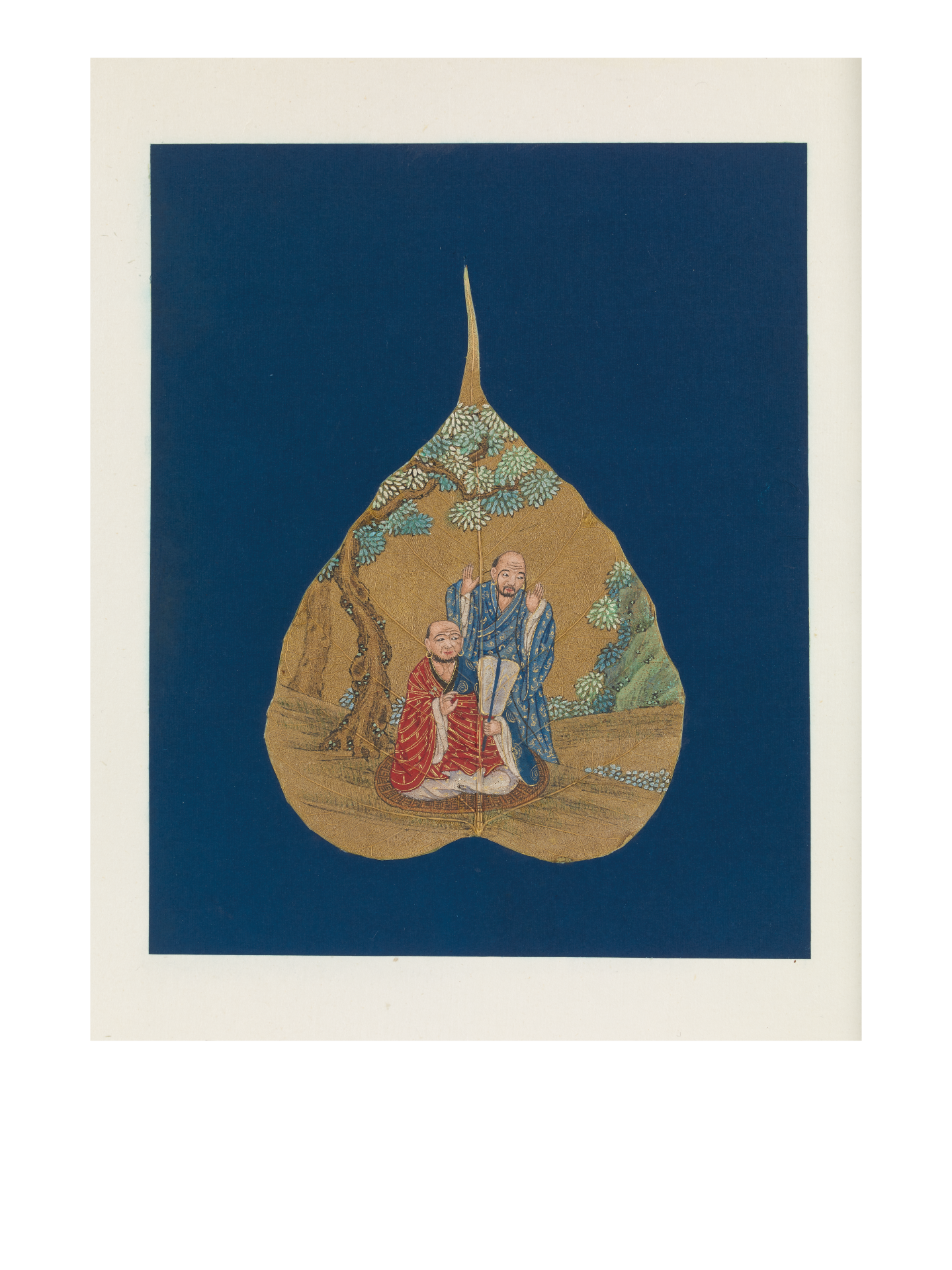 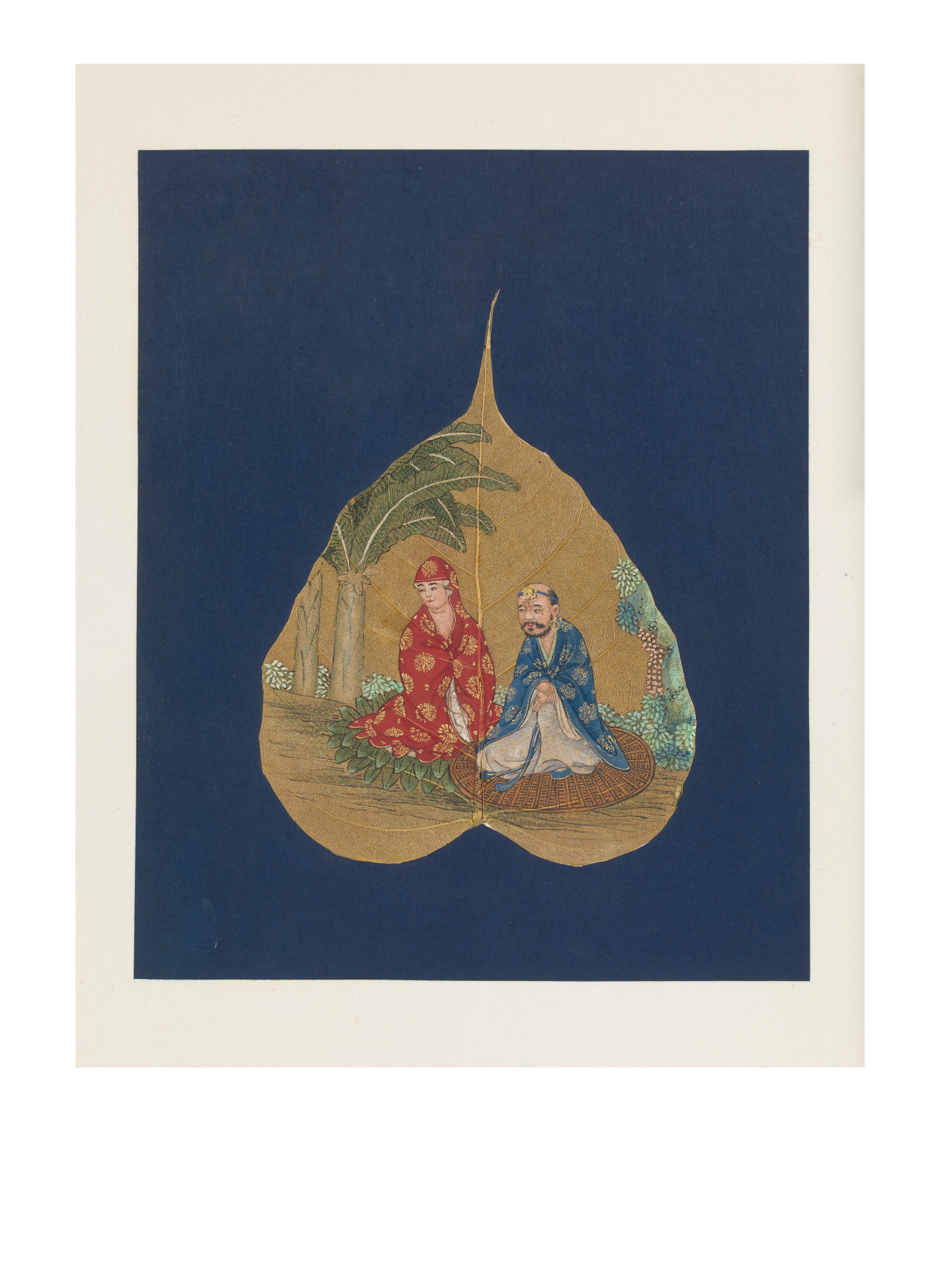 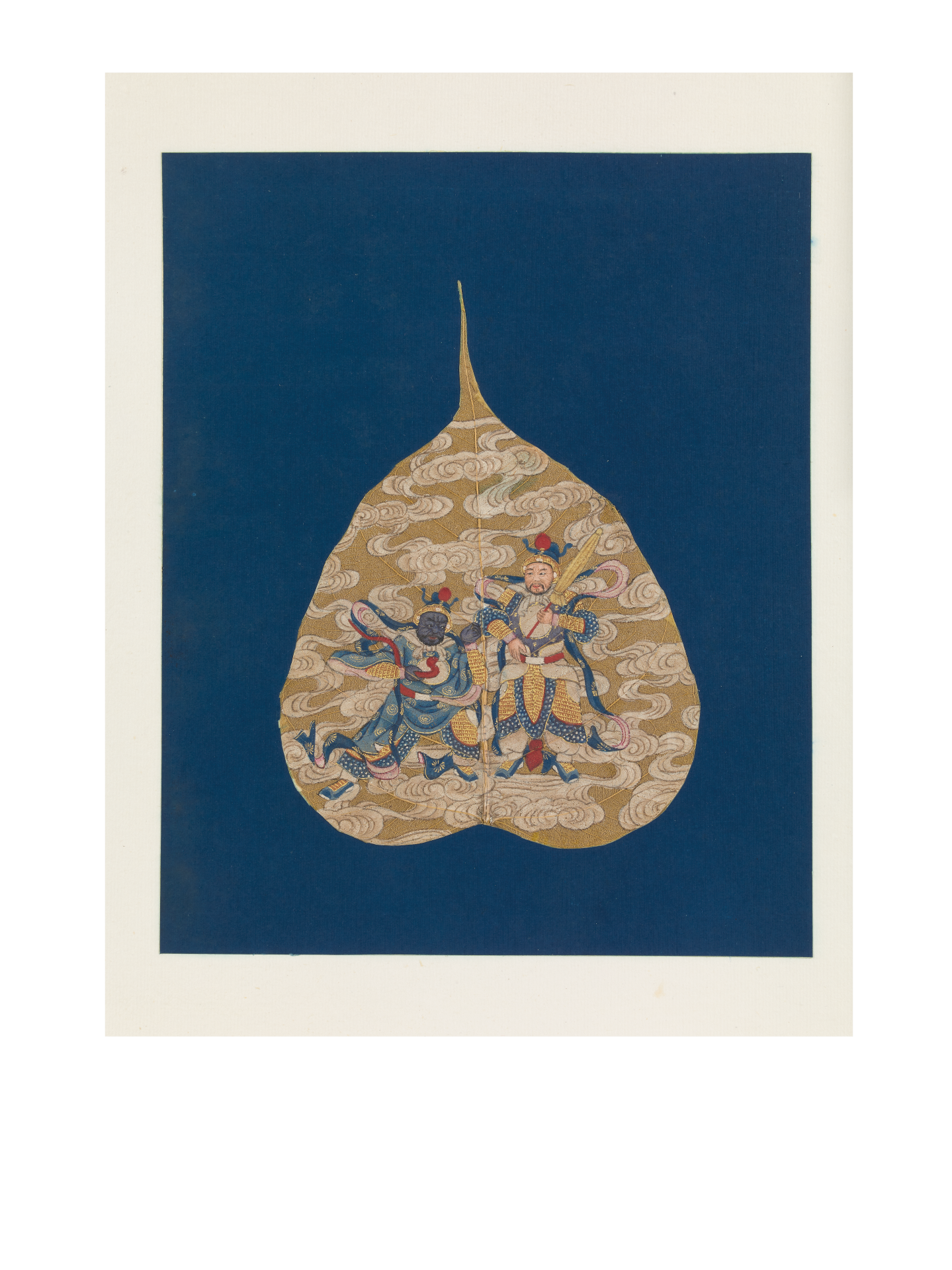 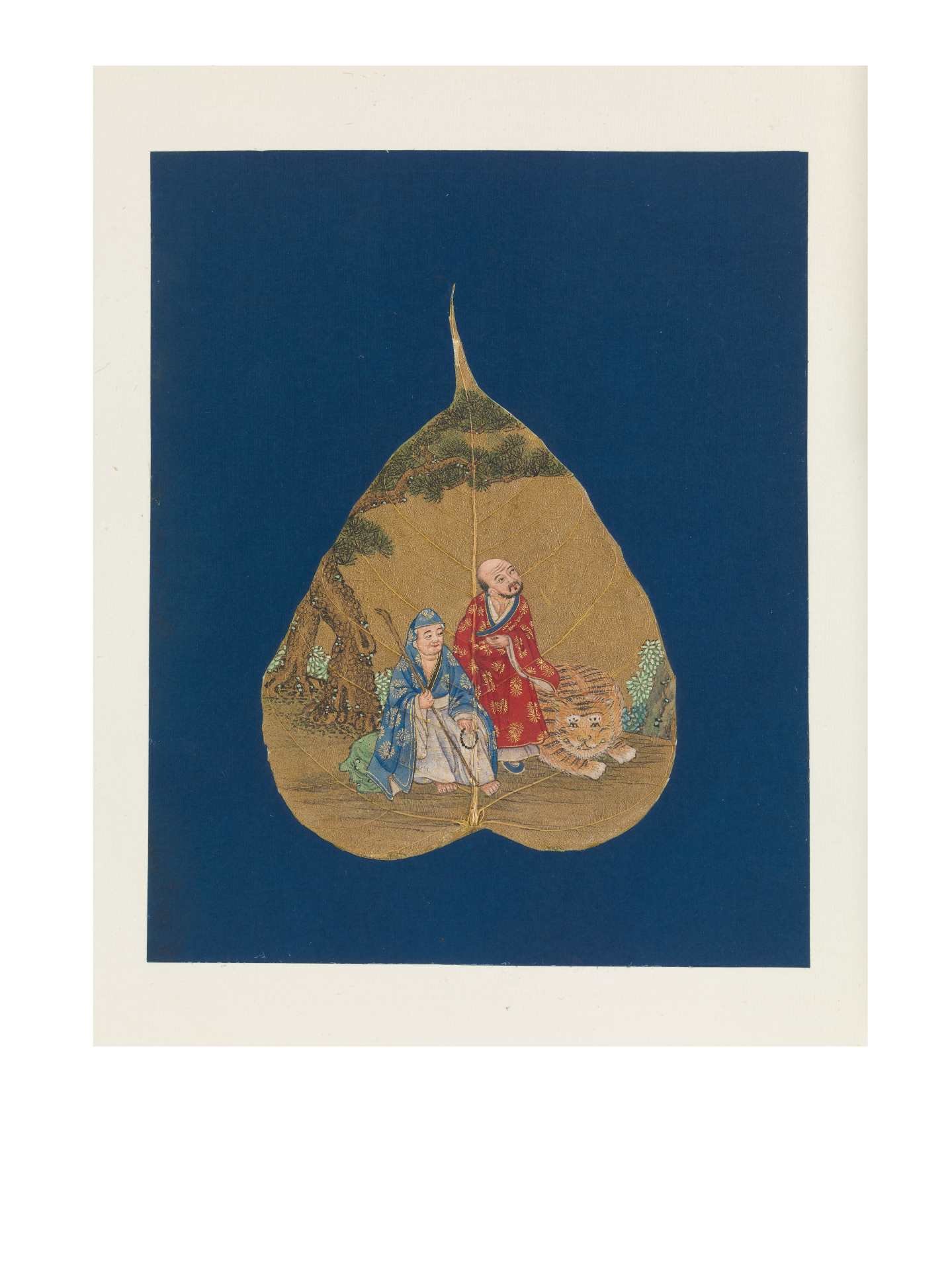 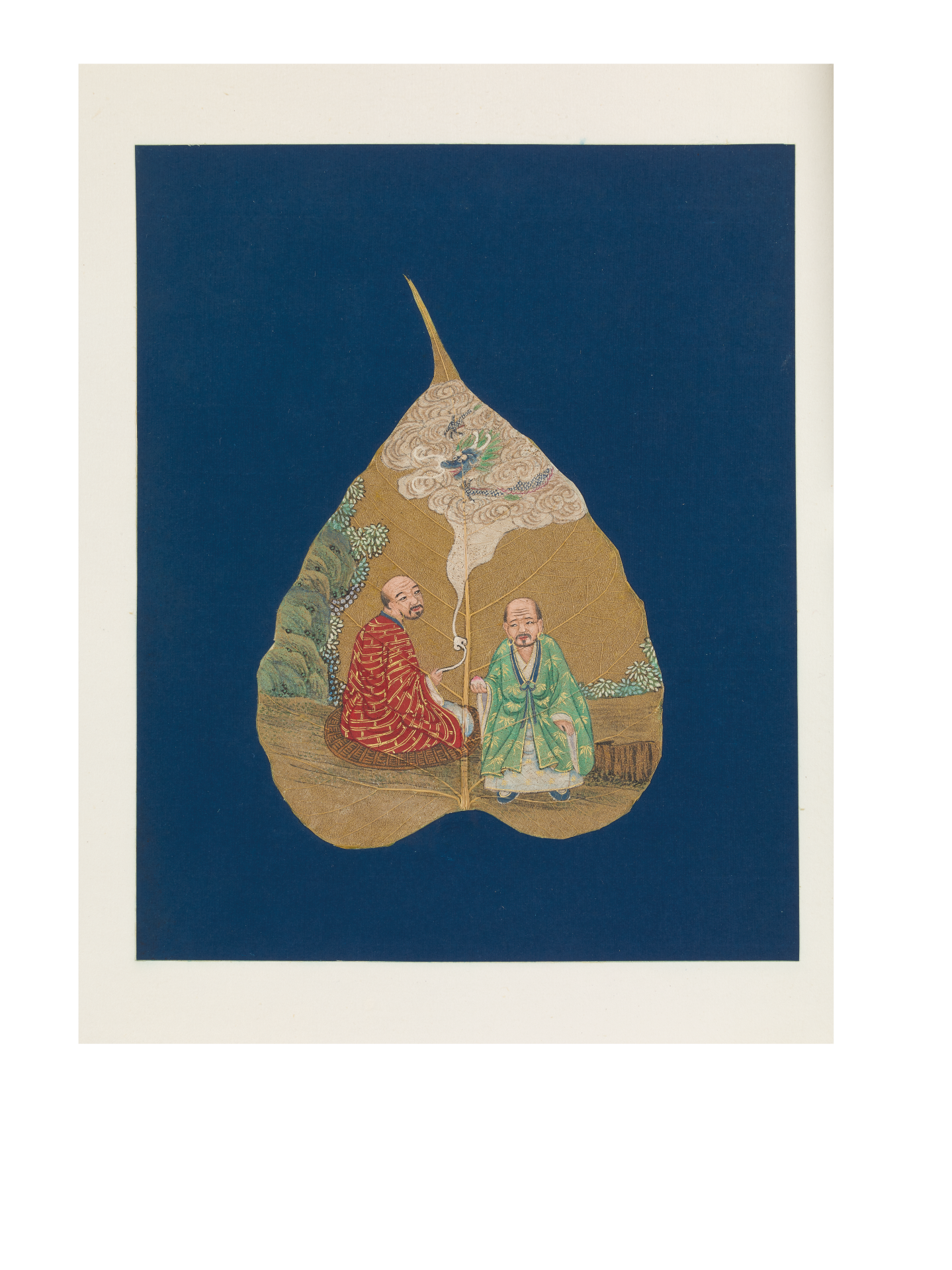 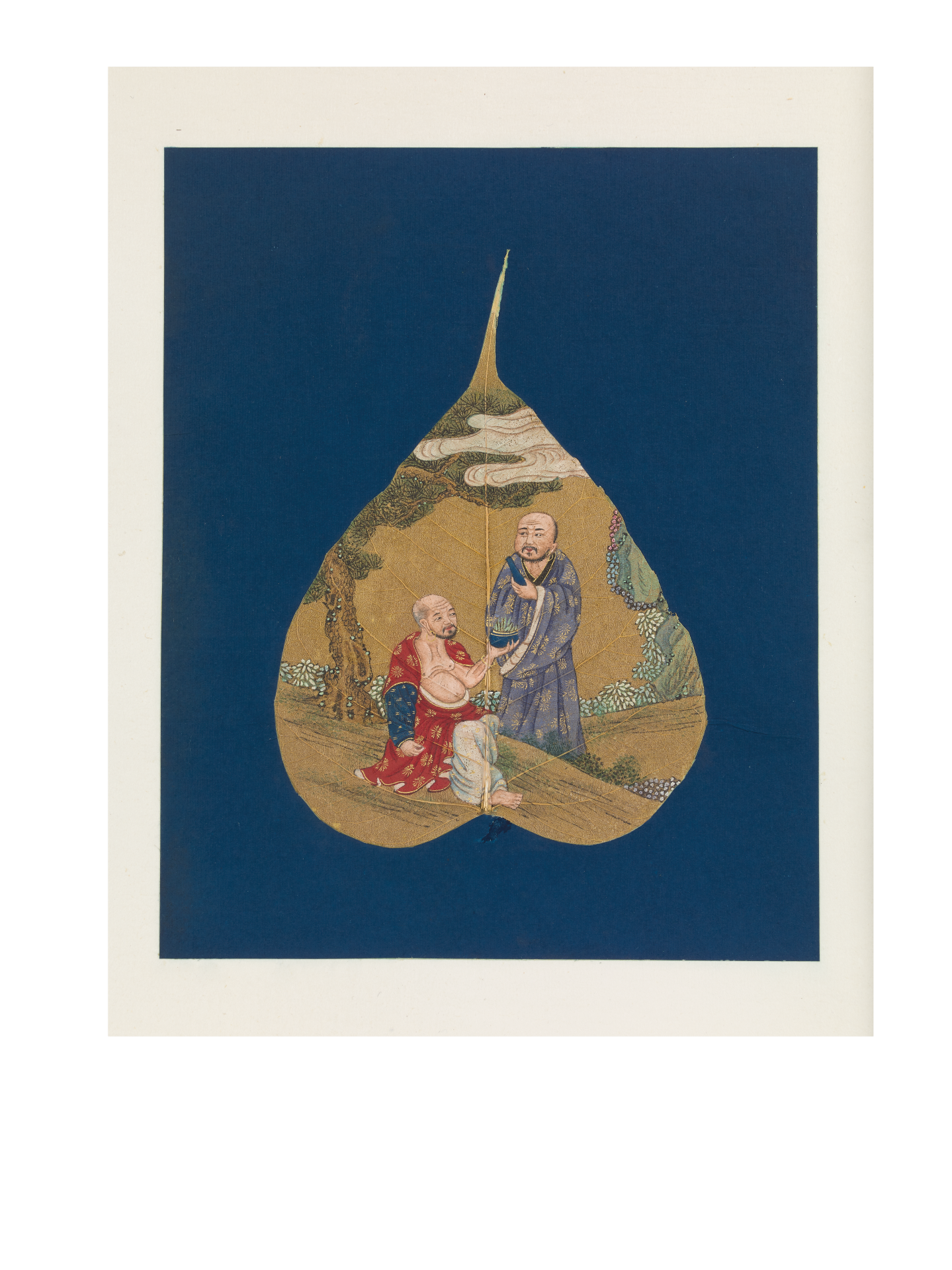 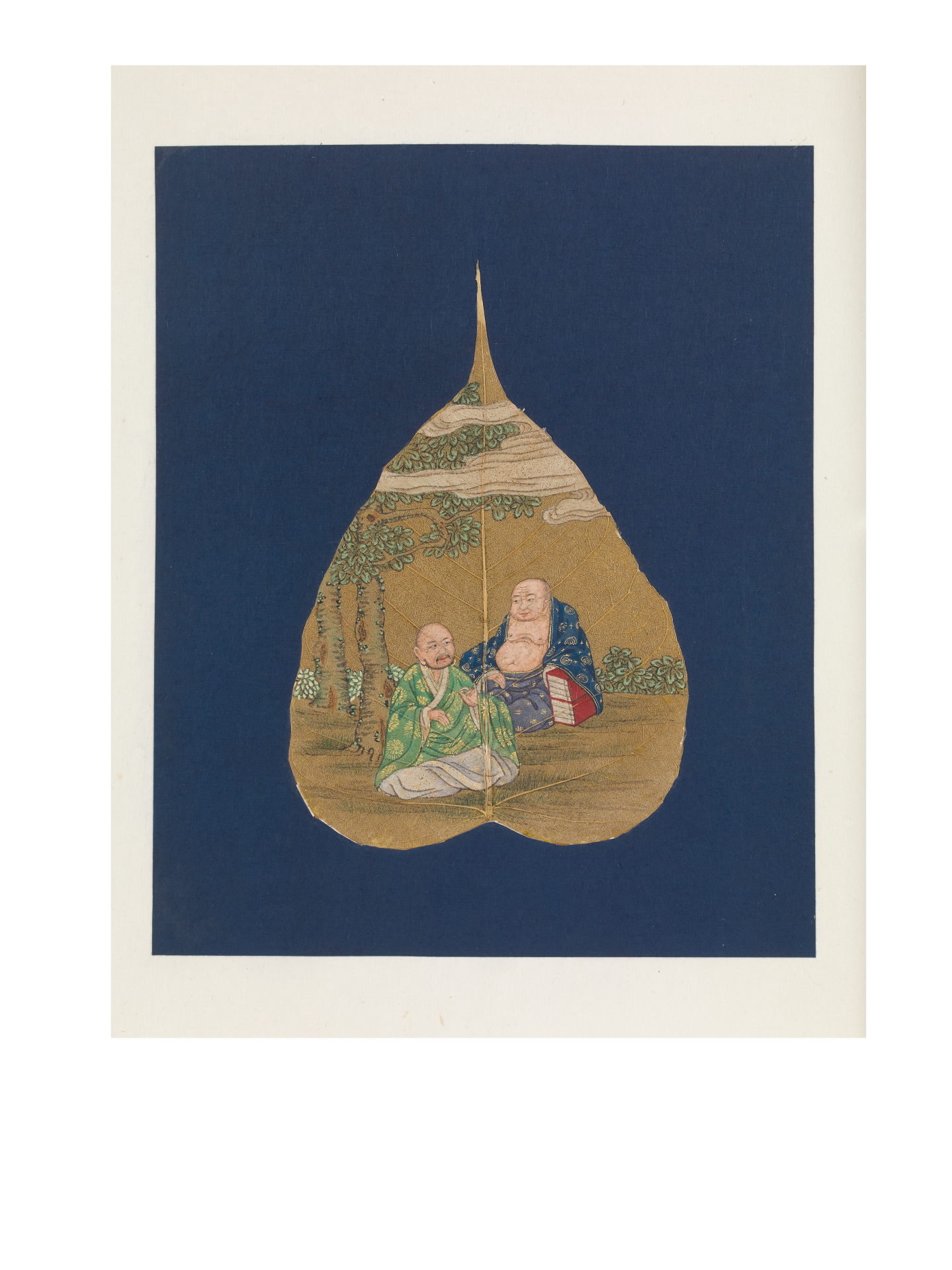 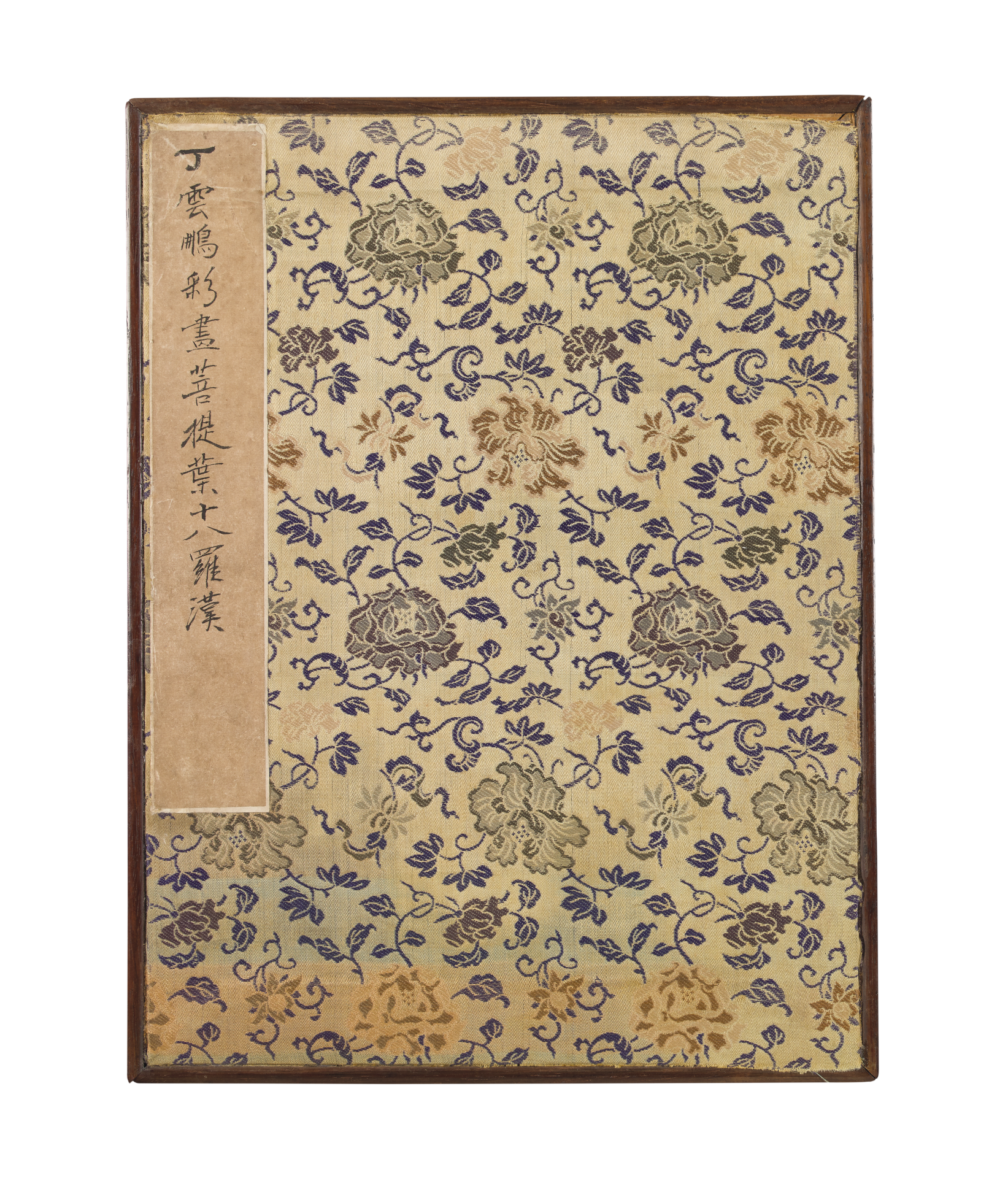 Painting on Bodhi leaves (leaves of the pipal tree) is a unique form of Chinese Buddhist art. Its production involves an elaborate process. Firstly, the Bodhi leaf has to be soaked in water for a month to remove the leaf tissues, leaving only the veins. Then the leaf is pasted onto a piece of paper cut into the same shape before painting is done. Since the leaf is an organic material, few examples have managed to survive. Extant pieces are mostly from the Ming and Qing dynasties (1368-1912).

This album is made up of twelve folios. A painted Bodhi leaf is mounted onto a sheet of deep blue paper on the right side of each folio. The title label on the album cover is written in ink with words denoting “The Eighteen Luohans painted on Bodhi Leaves by Ding Yunpeng”. The first and second folios are painted with the Four Heavenly Kings (Lokapāla) while the last folio with the Willow Guanyin. The rest of the nine folios are each painted with two Luohans, making up a total of 18. The Luohans differ in pose, and form groups of two. They are either reciting from the scriptures held in their hands gazing at something, or displaying psychic powers, under a tree or next to some mountain rocks. The paintings are vibrantly coloured, and the figures are all splendidly dressed. Their garments are decorated with various motifs highlighted with gold pigment. The facial features and drapery folds are lightly washed with colour to accentuate the sense of three-dimensionality.

However, the facial expressions of the figures in this album lack variation, which does not conform with the characteristic style of Ding Yunpeng. The seal mark at the end of the album is also different to Ding’s seals. The album thus should be a forgery attributed to Ding. Also appearing at the end of the album are collectors’ seals Xu Shichang yin (Seal of Xu Shichang) and Juren. Xu Shichang (1855-1939), courtesy name (zi) Buwu and sobriquet (hao) Juren, was an official of the Beiyang Government (1913-1928). It is very probable that this album was completed in the Qing dynasty when painting Luohan images on Bodhi leaves was in fashion.