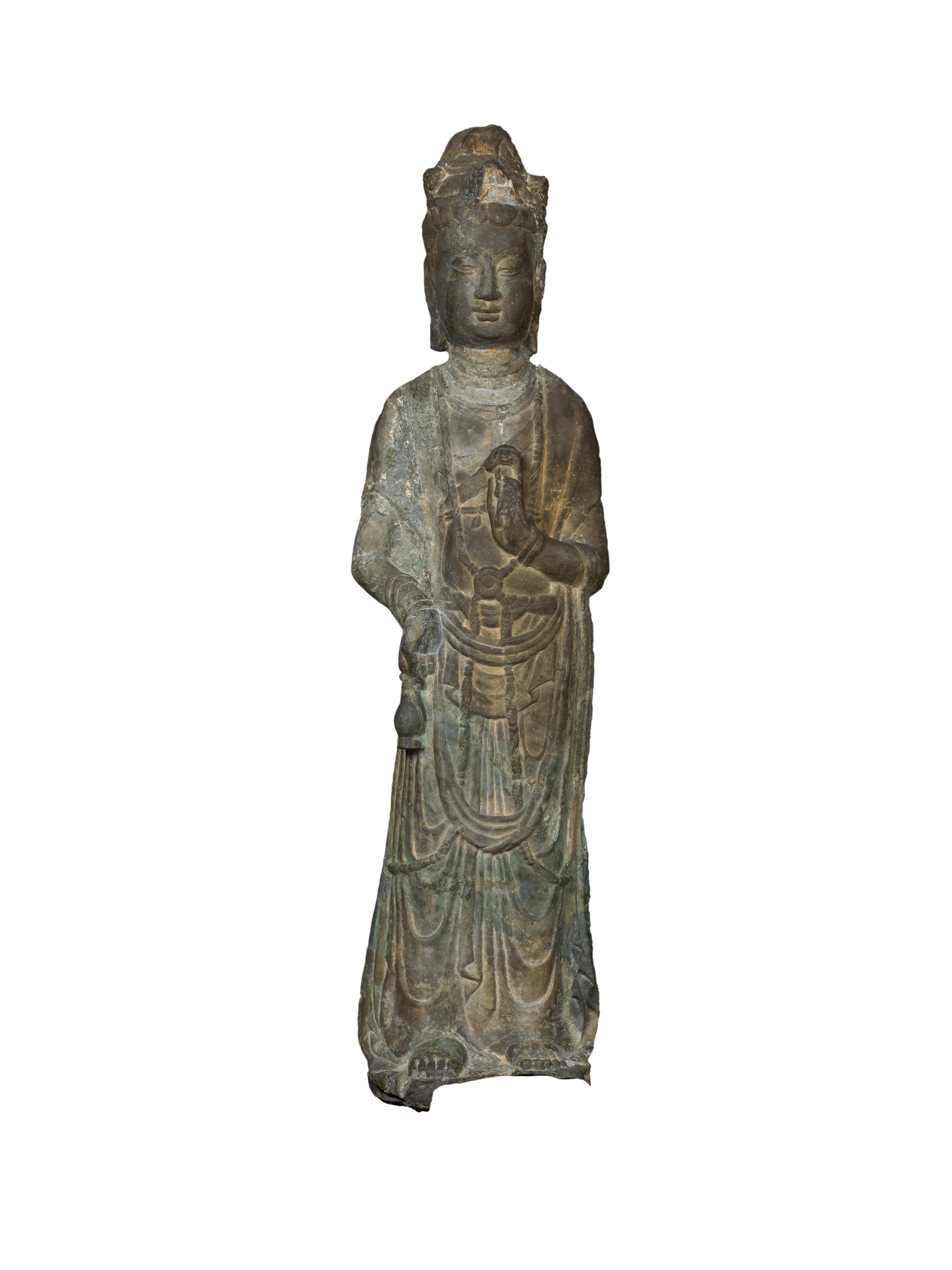 This standing Guanyin of the early Tang dynasty (618-907 CE) originally belonged to Longmen Caves carved into the rock face between the east and west cliffs of the Yi River in Luoyang, first constructed in the late Northern Wei dynasty (386-534 CE). Around 2,000 caves survive to this day. The late Northern Wei dynasty and the century between the 6th year of the Zhenguan reign (632 CE) and the 14th year of the Tianbao reign (755 CE) were the two most prosperous periods of cave construction.

This Guanyin statue was originally standing inside Zhao Keshi Cave (Cave 1038), a cave with a dome ceiling and a horseshoe-shaped plan. The principal niche has five large statues. More niches and statues are also cut out from the north and south walls. The hewing of this cave began in the late Northern Wei dynasty but was soon interrupted for some reasons. Construction resumed on the former basis during the early Tang dynasty and niches were cut out. The dating of the cave is shown by the votive inscription commemorating the making of a Maitreya statue by several devotees (names incomplete), engraved in the 2nd year of the Yongchun reign (683 CE) of the Emperor Gaozong of the Tang dynasty.

This Guanyin statue has a purifying bottle in the right hand and a lotus held in the left hand, in front of the chest. The Bodhisattva has a tall topknot behind a crown with floral design, an elongated oval face with soft plump cheeks, crescent eyebrows delineated with incised lines, downcast eyes with pupils, a nose with relatively broad bridge and rounded nostrils, a delicately modelled mouth with gently parted lips as if about to speak, and a countenance expressing joy and kindliness.

He also has a rather slender build, sloping round shoulders, a necklace over the flat solid chest, streamers around the shoulders and a criss-crossed long necklace anchored in front of the belly forming an X-shape before dropping further down to the knees and then turning to the back of the body. The lower body is wrapped in a long skirt held in place by a girdle, while the upper hem falls around the waist. The layering of the shawl and the strung jewellery are well represented.

This statue is noted for the remarkable modelling of its facial expression, the good proportion of the body and the exquisite carving of its clothes and accessories. The carver has also skilfully used different arched ridges to render the expressions of the folds. The statue is a masterpiece of sculptural art of the early Tang dynasty.