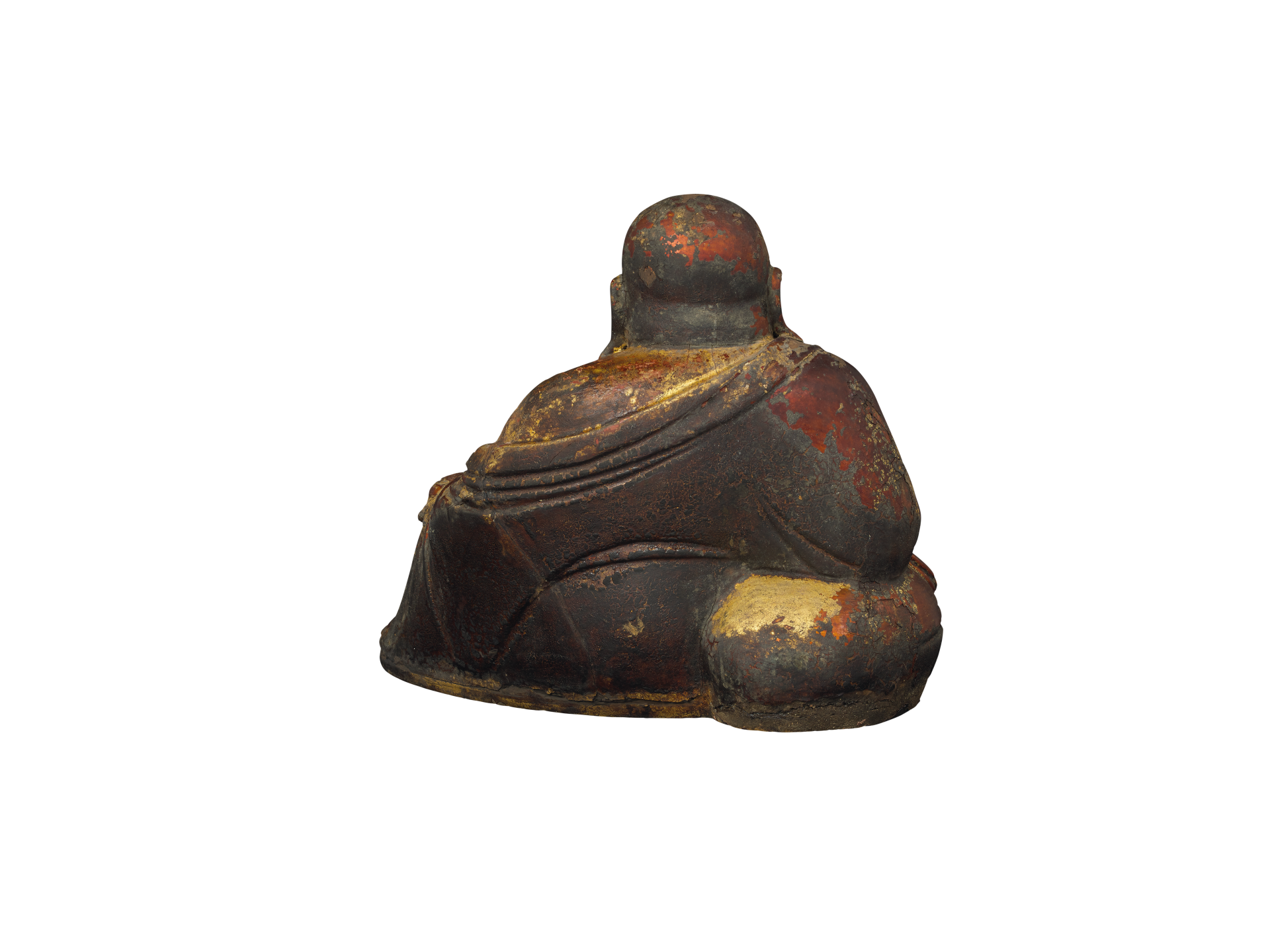 Maitreya, the Future Buddha and successor of Śākyamuni, is represented as either a Buddha or Bodhisattva, in a rich variety of iconographic styles. The big-belly Maitreya Buddha, best known to the Chinese, first emerged in the Five Dynasties (907-979 CE). Legend has that during the late Tang dynasty, there was a monk called Qici (unknown birth year-917 CE) who was known for his magical powers. Characterised by his short stature, knitted nose, protruding big belly and a staff slung over his shoulder suspending a cloth bag, he often walked through the streets begging for alms. Hence, he was called the Cloth-Bag Monk. The last verse composed by him before his death says, “Maitreya is truly Maitreya. He manifests million-fold and billion-fold in front of the people of the world, but they do not recognise him.” He was therefore regarded as the manifestation of Maitreya, and many images of Qici were portrayed and worshipped in temples. This image of Maitreya subsequently gained popularity in China.

This wooden Maitreya statue shows traces of the polychrome painting once decorating its surface. The statue has an oval head, very plump cheeks and chin, elongated ears touching the shoulders, well-proportioned facial features, a big broad nose with rounded tip, a broad smile, and a jocund and relaxed countenance. His robe slides away from his left shoulder, exposing his chest, belly and left shoulder. He is seated in ‘relaxation posture’ (lalitāsana), with his right hand placed on the cloth bag grasping the drawstring, while the left hand holding a strand of prayer beads and resting on his knee. The statue has a large rotund body, thick round shoulders, soft droopy muscles, a slightly sagging chest, a huge pot belly, stocky limbs, plump and fleshy muscles, and an artless countenance. The drapery is succinctly represented. The overall image is crude.

The sacred deposit placed inside the statue consists of śarīra and seeds of various plants as well as a divination slip dated to the 57th year of the Kangxi reign (1718). The śarīra is orange-red in colour, semi-transparent, small and of elongated shape. Śarīra refers to the crystalised bodily relics left after the cremation of high monks, symbolising the supreme merits achieved by the monk in his perfect practice of the precept, meditation and wisdom during his lifetime. Depositing these relics into a statue can enhance the statue’s strength of empowerment and add immense merits to the donor.