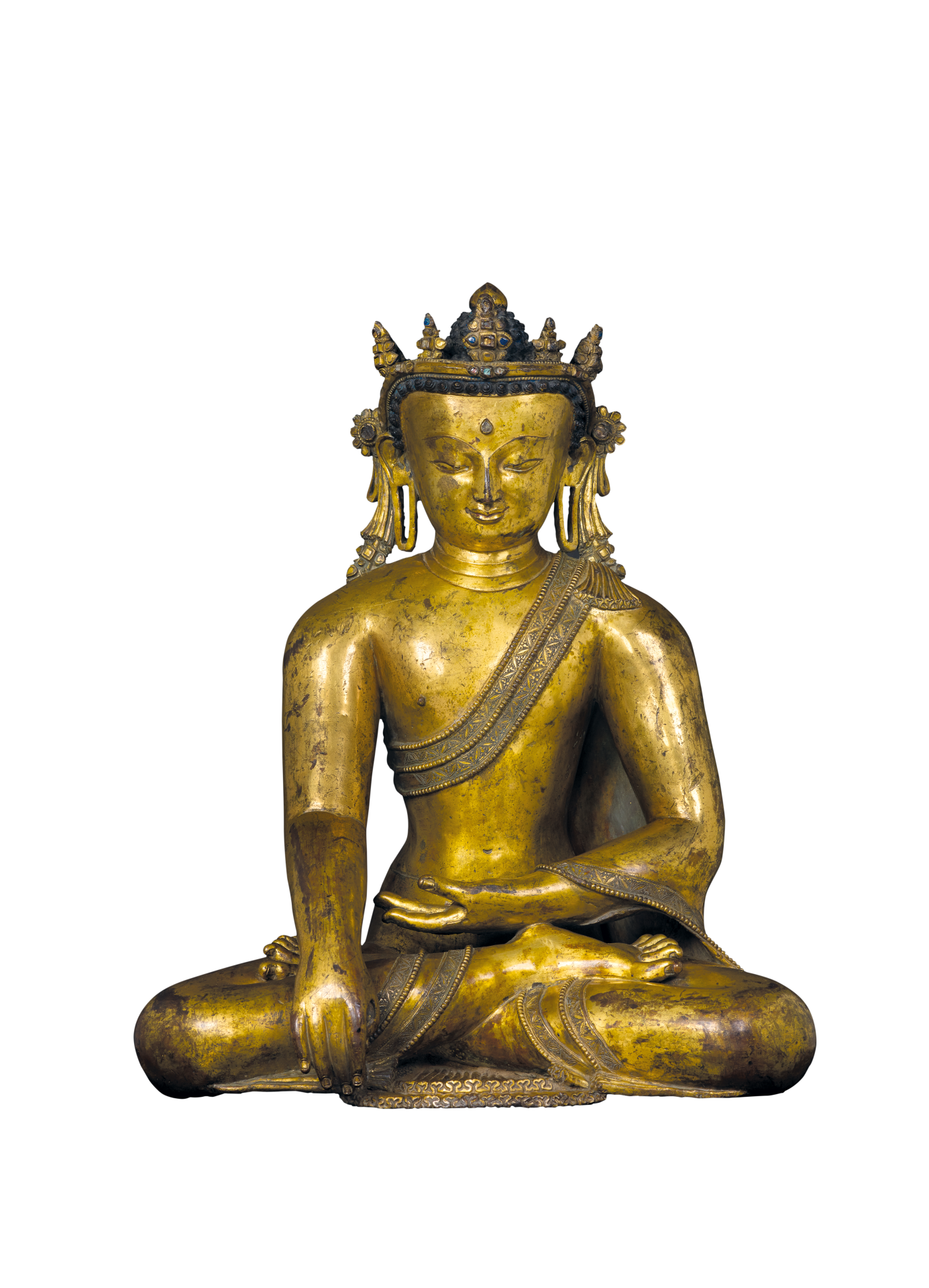 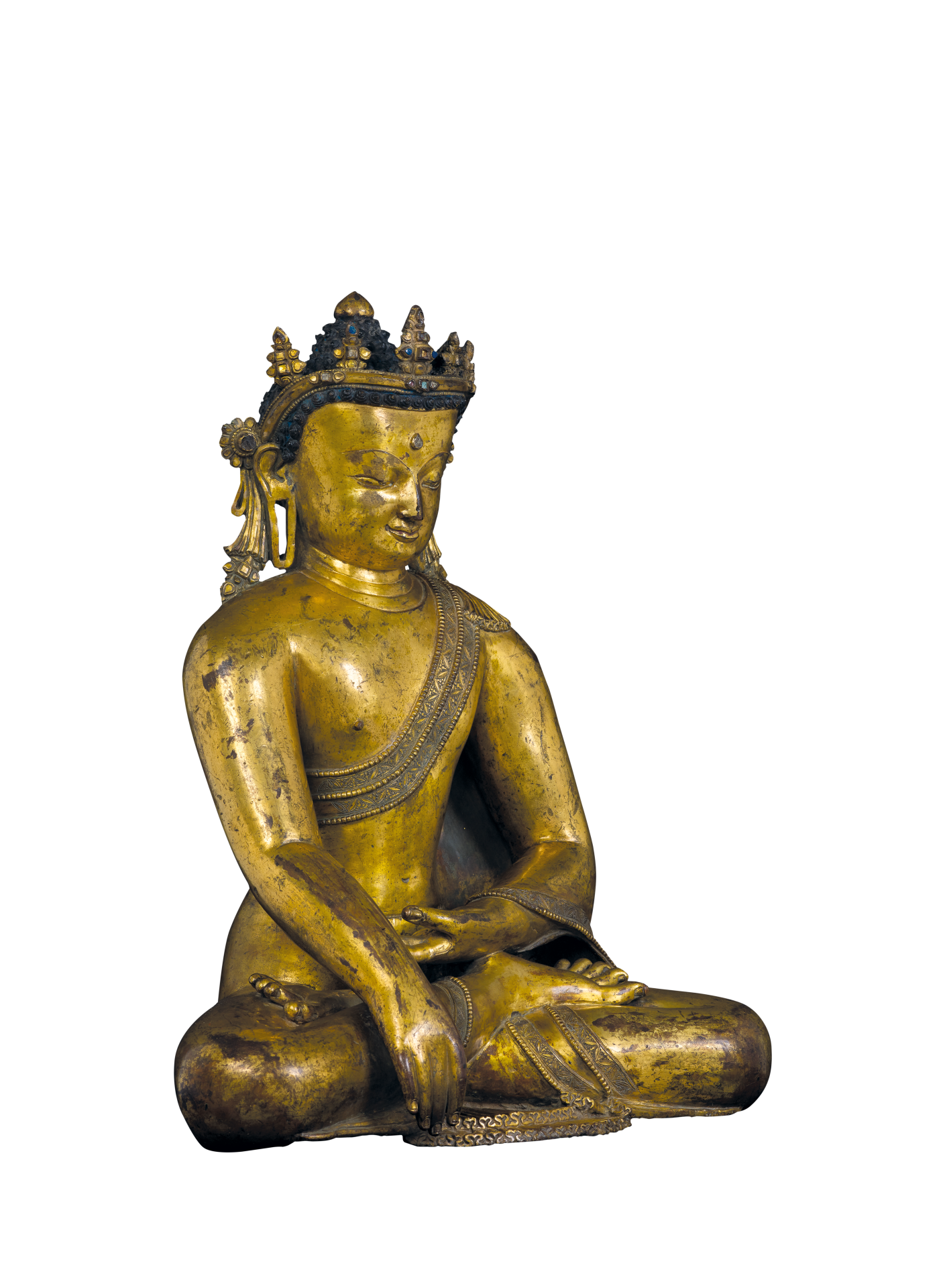 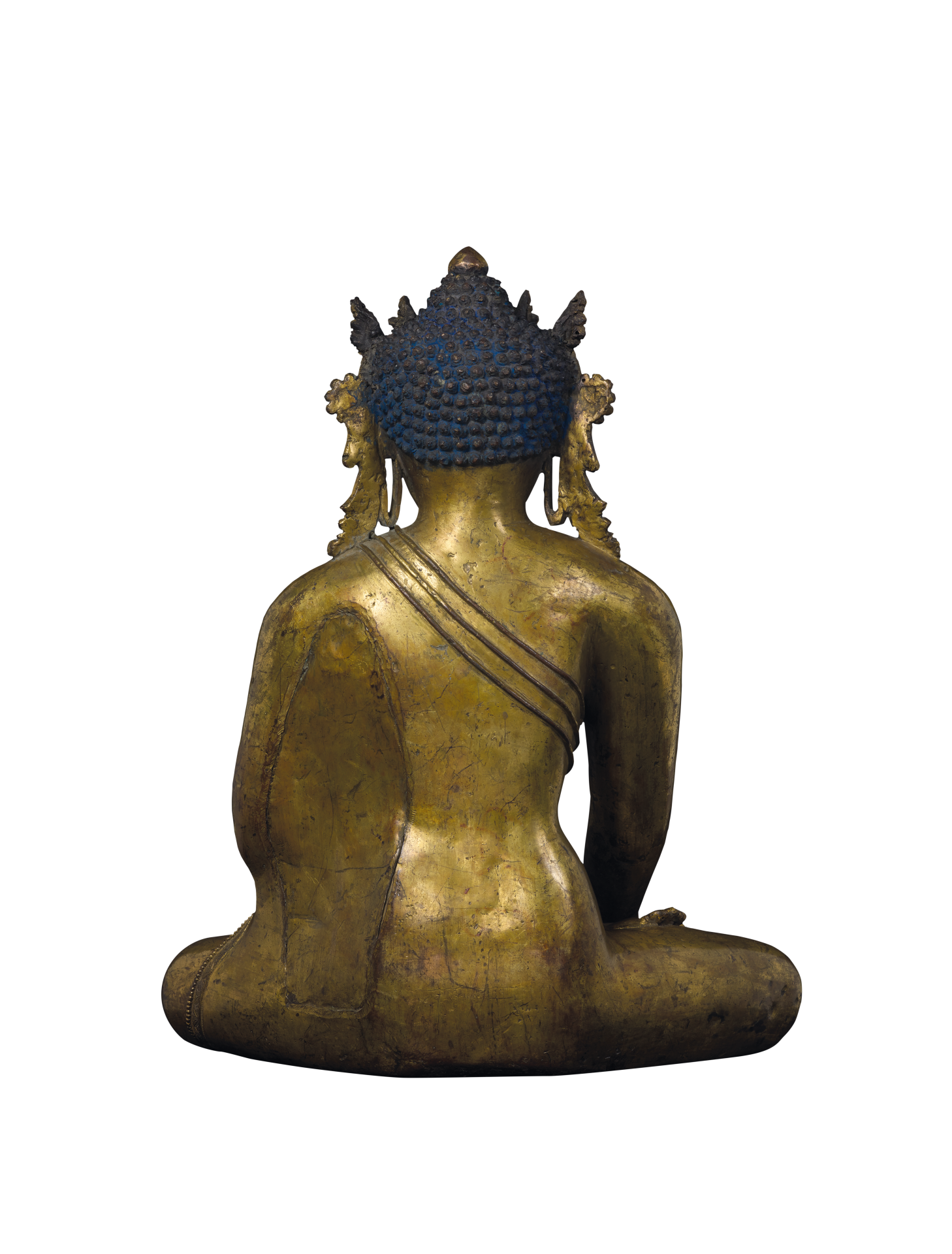 Nepal is located in the southern foothills of the Himalayas mountain range – in the vicinity of northwest India, the birth place of Buddhism. As early as the 3rd century BCE, this religion started to spread extensively. Buddhism continued to thrive in the region under the patronage of successive kings. Nepalese sculptures, mainly of gilt bronze have a long tradition. The period from the 13th to the 15th century was the golden age of Nepalese statuary art, with works credited for their smooth plump body, spontaneously elegant postures and distinct Nepalese decorative elements. This statue, with a squarely seated posture and sumptuous gilt, is a representative masterpiece of this period.

This statue wearing a five-leaf regal crown is seated with legs locked in ‘lotus posture’ (padmāsana); the right hand in ‘earth-touching gesture’ (bhūmisparśamudrā), the left elbow bent while the left hand displays the ‘meditation gesture’ in front of the belly.

This is recognisably Akṣobhya Buddha of the East and head of the Diamond Realm (Vajradhātu) in Tantric Buddhism. The statue has a hazelnut-shaped face that tapers downward, a tall conical uṣṇīṣa, tight snail-like indigo curls and elongated ears with large perforation. The crown has ribbons hanging down the sides. The gems originally adorning the crown are largely missing; only very few remain. The statue has relatively wide-set facial features, a broad forehead with an ūrṇā in the shape of a waterdrop in the middle, half-closed downcast eyes, a high straight nose with an aquiline tip, thick full lips with lifted outer corners, a smiley face, and a countenance indicating benevolence and compassion. He wears a kāṣāya baring the right shoulder and has the ends of the robe draping over his left shoulder.

The body is well-built with squarish thick shoulders and a narrow waist forming a V-taper torso; a slightly protruding belly, elastic and supple muscles, smooth stout limbs, fleshy hands and feet, and vivid and nimble knuckles. Except for the fan-shaped dense pleats upon the left shoulder and along the hemline between the legs, no drapery is depicted. The silhouette of the entire body under the thin and body-clinging robe is clearly revealed. The borders of the robe is chiselled with continuous beads and foliage motifs bearing a strong flavour of Nepalese decorative art.