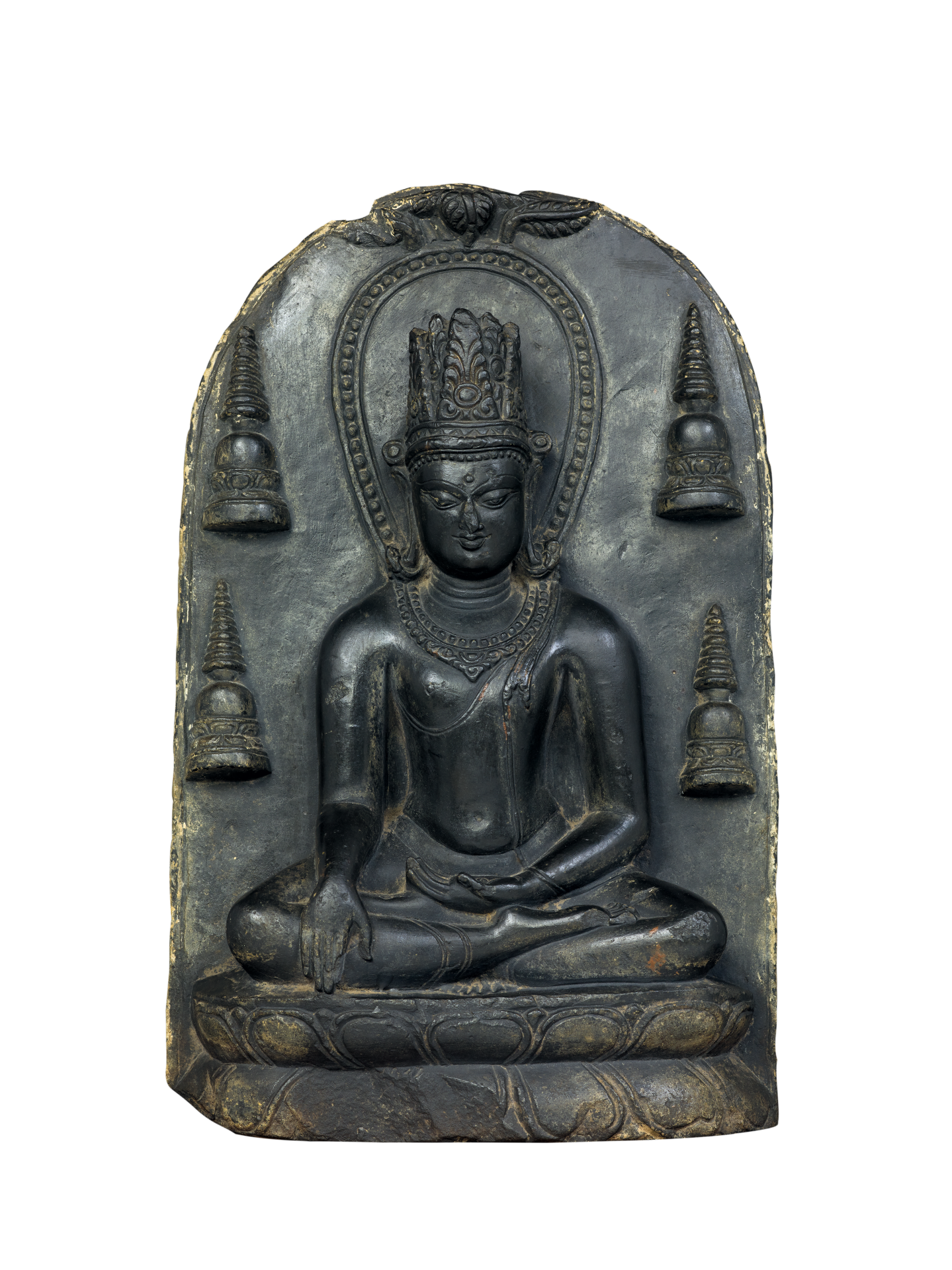 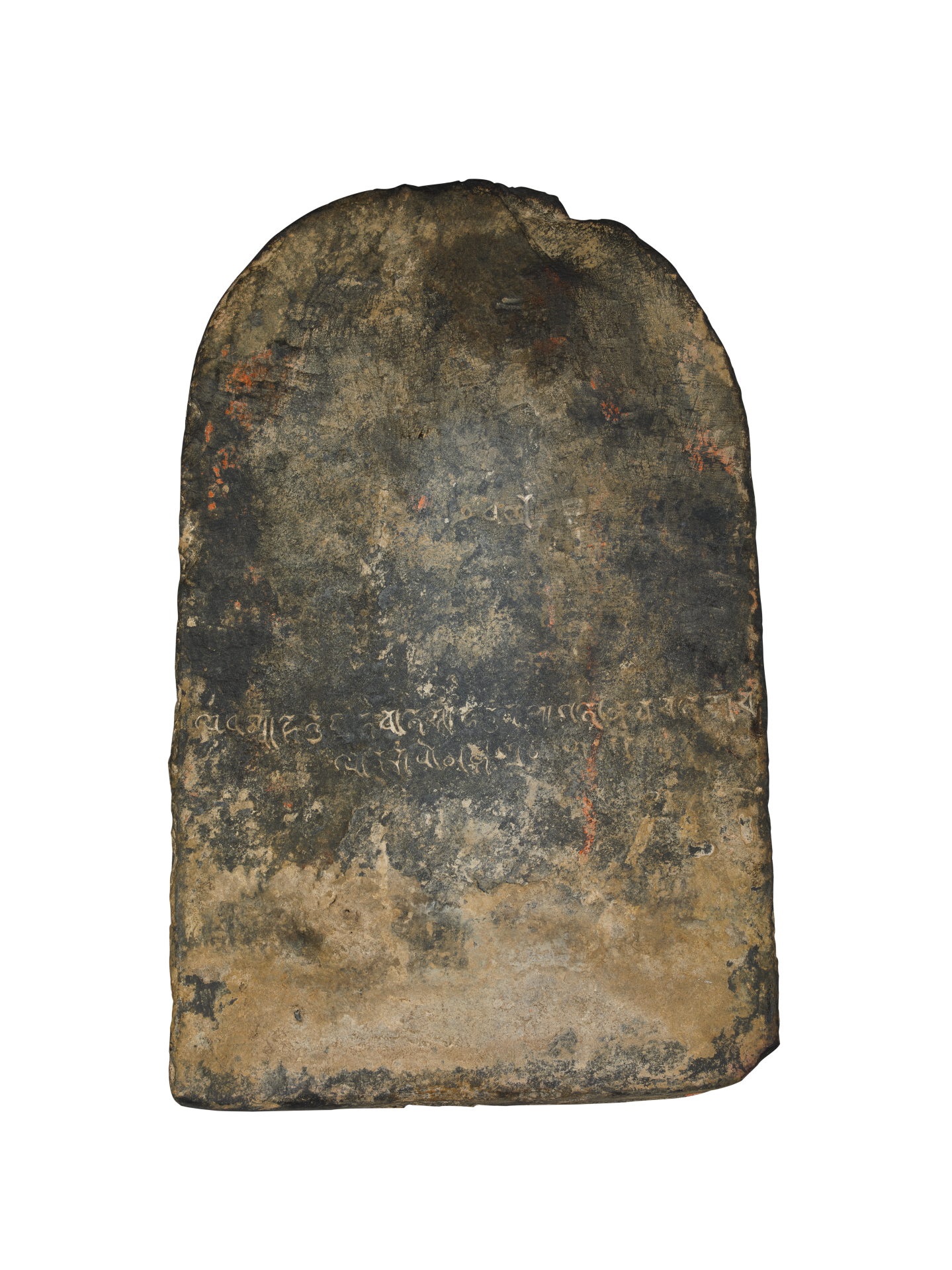 This statue showing Śākyamuni Buddha seated with crossed legs in ‘lotus posture’ (padmāsana) and one hand in ‘earth touching gesture’ (bhūmisparśamudrā), is based on the “True Image of the Buddha on the Diamond Throne”. It portrays him attaining Enlightenment after subduing Marā the demon, in Bodh Gaya. Legend has it that, while two Brahmins were expanding the Mahābhodi Temple initially built by King Aśoka (reigned from circa 268-232 BCE), they thought of recruiting someone to carve a Śākyamuni statue subduing the demons and attaining Buddhahood to be honoured in the temple. Bodhisattva Maitreya manifested as a Brahmin before them and offered to take up the task. But he said that he had to conduct the carving alone in the temple for six months – no clergy or lay people should open the temple’s door and enter it before he completed his work. Four days before the designated date, the people were so suspicious of what was going on inside the temple that they opened the door and went inside. They found nobody but a majestic statue with all the characteristic properties of the Buddha, almost completed except for some minor details. Then the people decorated the statue with strings of jewels and a regal crown. This was the well-known “True Image of the Buddha on the Diamond Throne” or “Auspicious Bodhi Image”.

This statue shows Śākyamuni wearing a tall three-leaf crown exposing tight snail-like curls along its lower edge. The elongated face features a squarish forehead with an ūrṇā in the middle, fleshy cheeks, a slightly damaged nose bridge, and full thick lips with lifted outer corners. Wearing a kāṣāya exposing the right side of the body, the Buddha is seated with legs locked in ‘lotus posture’ on the double-lotus pedestal in the form of a full-blown lotus with half of the petals facing upward and the other half facing downward; the right hand in ‘earth-touching gesture’ and the left hand in ‘meditation gesture’ in front of his belly. The iconography represents the Buddha’s subduing of the demons and attaining of Buddhahood. The statue has a robust physique with broad, squarish shoulders and a narrow waist, forming a gently V-taper torso; a strong thick chest, a slightly bulging abdomen and stout limbs.

The drapery is extremely succinct. Except for some fine ridges delineating the edges of the robe and two parallel catenaries between the lower legs, almost no drapery is found on the well-undulated body surface. Behind the statue’s head is an oval nimbus with a bead-edged frame. Carved above the nimbus are tree leaves symbolising the Bodhi Tree under which the Buddha attained Enlightenment. The two relief stupas with dome-shaped body standing on either side of the Buddha are motif commonly seen among Pāla statuary.