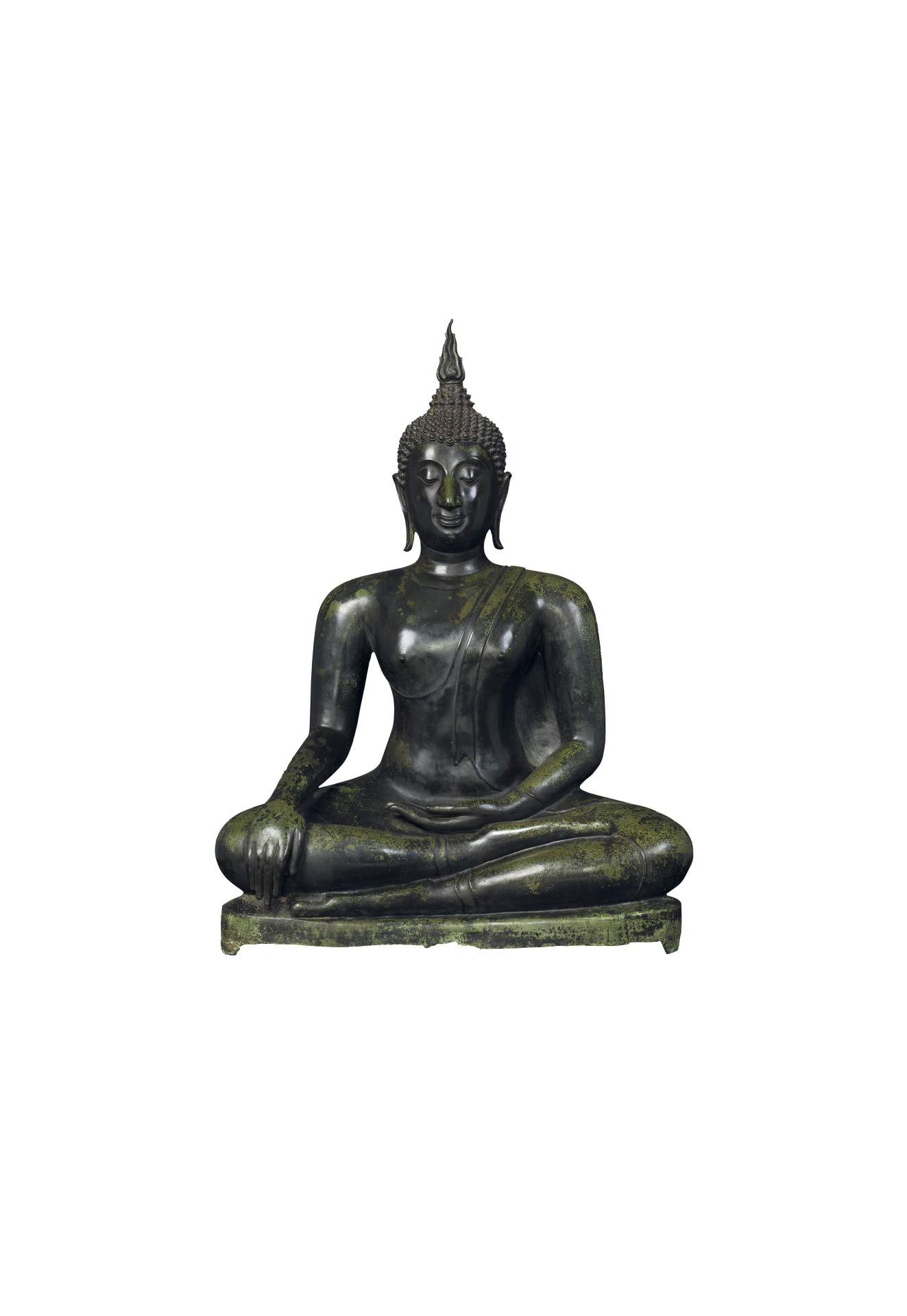 This seated Śākyamuni Buddha statue is wearing a kāṣāya baring the right side of the body, while the ends drape over the left shoulder and hang down the front of his abdomen. He is seated with legs locked in ‘lotus posture’ (padmāsana); the right hand in ‘earth-touching gesture’ (bhūmisparśamudrā) and left hand in ‘meditation gesture’. This is the statutory representation of Śākyamuni’s subduing of the demons and attainment of Buddhahood in Bodh Gaya, the most important event in his life. According to the story, when Śākyamuni was about to attain Enlightenment under the Bodhi tree, the demon king Māra, out of fear, led his daughters and demon army to attack Śākyamuni in an attempt to prevent the latter from attaining Buddhahood.

Śākyamuni chanted some sacred verses and displayed the ‘earth-touching gesture’. Immediately the earth god emerged from the ground, holding a Seven-Treasure Jar in worship of Śākyamuni. He proclaimed the boundless merits of Śākyamuni in his previous births. The universe then quaked tremendously. Utterly routed, Māra and his demon army fled. Eventually Śākyamuni achieved Supreme Enlightenment and attained Buddhahood.

This statue is a typical work of the Sukhothai Kingdom (1238-1438) in ancient Thailand. The Buddha has tight snail-like curls, a flame-shaped uṣṇīṣa, elongated ears with flared earlobes, and a ‘goose-egg’ shaped face with sharply defined features; fleshy cheeks, crescent eyebrows, downcast eyes with wavy slits and lifted outer corners, a bladder-shaped nose with rounded tip, thick broad lips and a smiley countenance revealing serenity and peace. He also has a funnel-shaped upper body, squarish thick broad shoulders and a thick solid chest. The limbs are proportionately longer. The arms are round like pillars. The kāṣāya appears thin and light. The body-clinging robe follows the undulating contours of the body. No drapery is depicted except for some crested lines succinctly representing the edge of each sleeve.