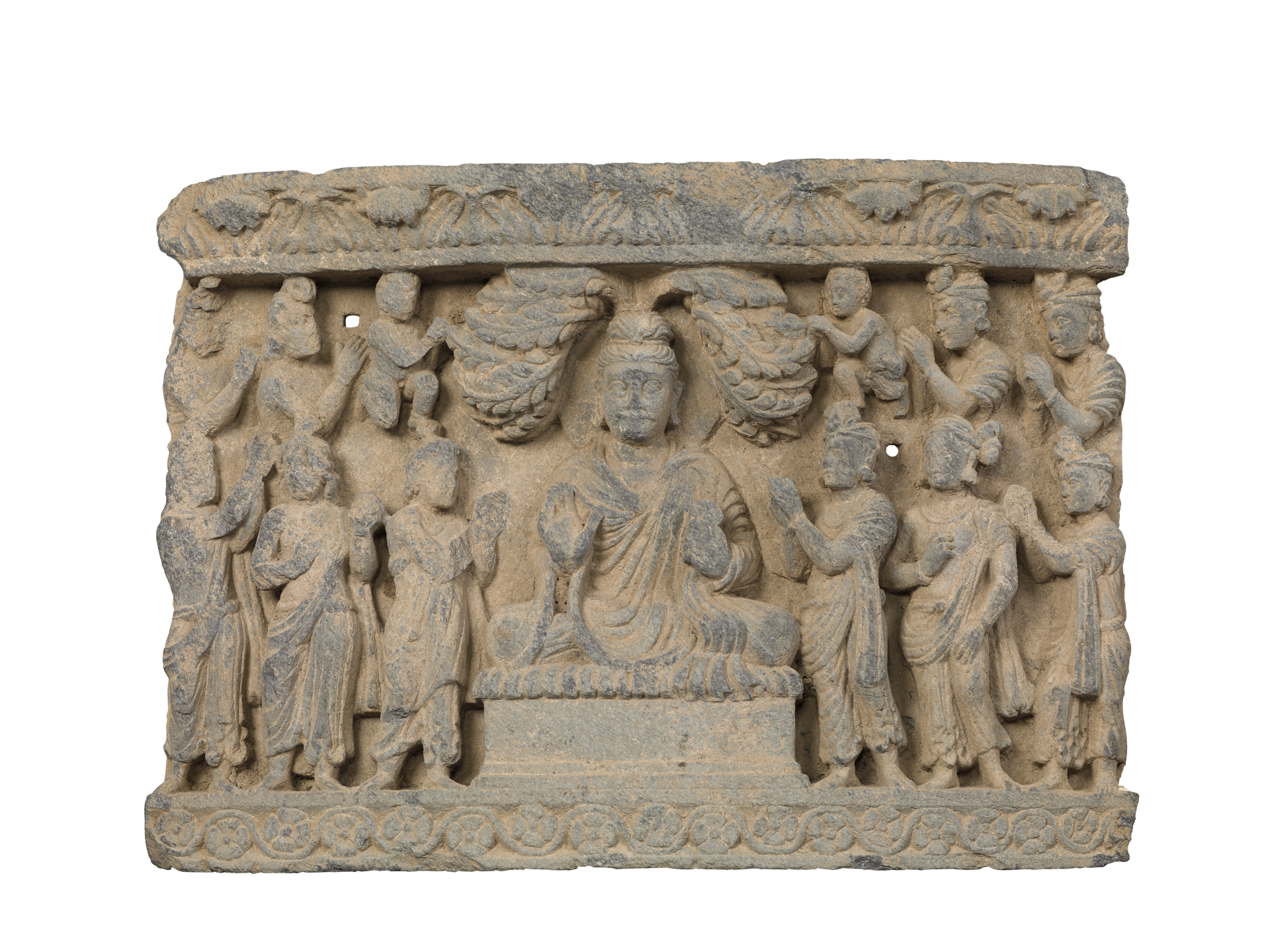 There are many works portraying Śākyamuni’s preaching scenes in Gandhāran art, using different character groups to illustrate his edification process in different stages. This is to highlight the important connotations of the Buddhist doctrine. The audience portrayed in this relief appear like divine beings. The absence of fully ordained monks (bhikṣu) with shaven head suggests that this is the episode of Brahmā supplicating to Śākyamuni, requesting the latter to remain in the world to turn the Dharma wheel, after Śākyamuni’s attainment of Buddhahood underneath the Bodhi tree (pipal tree).

According to Buddhist literature, the Buddha remained silent and did not give any teaching after attaining Enlightenment because he believed that sentient beings could hardly be edified and he would rather enter parinirvāṇa as soon as possible. Brahmā perceived this, and out of concern, he manifested in front of the Buddha to persuade the latter to change his mind. After Brahmā’s third supplication, the Buddha out of compassion for sentient beings accepted the supplication and decided to stay in the mortal world to preach and to propagate the Buddhist Dharma.

This scene portraying the supplication of Brahmā is carved in high relief. The faces of the figures have become blurred due to weathering of the rock surface. The Buddha is seated majestically on a pedestal underneath a tree, flanked by divine beings arrayed in two registers. The upper and lower borders of the relief are decorated with tendril and floral motifs. The Buddha has a prominent uṣṇīṣa girded with a cord under large wavy curls; squarish jaws, round eyes and a short moustache above the lips. He wears a kāṣāya covering both shoulders. His right hand displays the ‘fearless gesture’ (abhayamudrā), indicating that he is preaching, while the left hand clutches the end of his robe. He is seated with legs locked in ‘lotus posture’ (padmāsana) on a square pedestal.

Six devotees of similar posture are symmetrically arranged on his sides. The foremost figure to the left of the Buddha is Brahmā (also as Mahābrahmā) who wears a topknot. The one immediately to the right of the Buddha is Indra who wears a crowned turban. Except for some minor differences in their hairstyle and hair ornaments, both figures with palms joined are turning toward the centre and looking up at the Buddha with great sincerity and devoutness. The slight curvature of the reverse of this relief indicates that it was originally part of a larger relief portraying the life story of the Buddha, around a stupa.