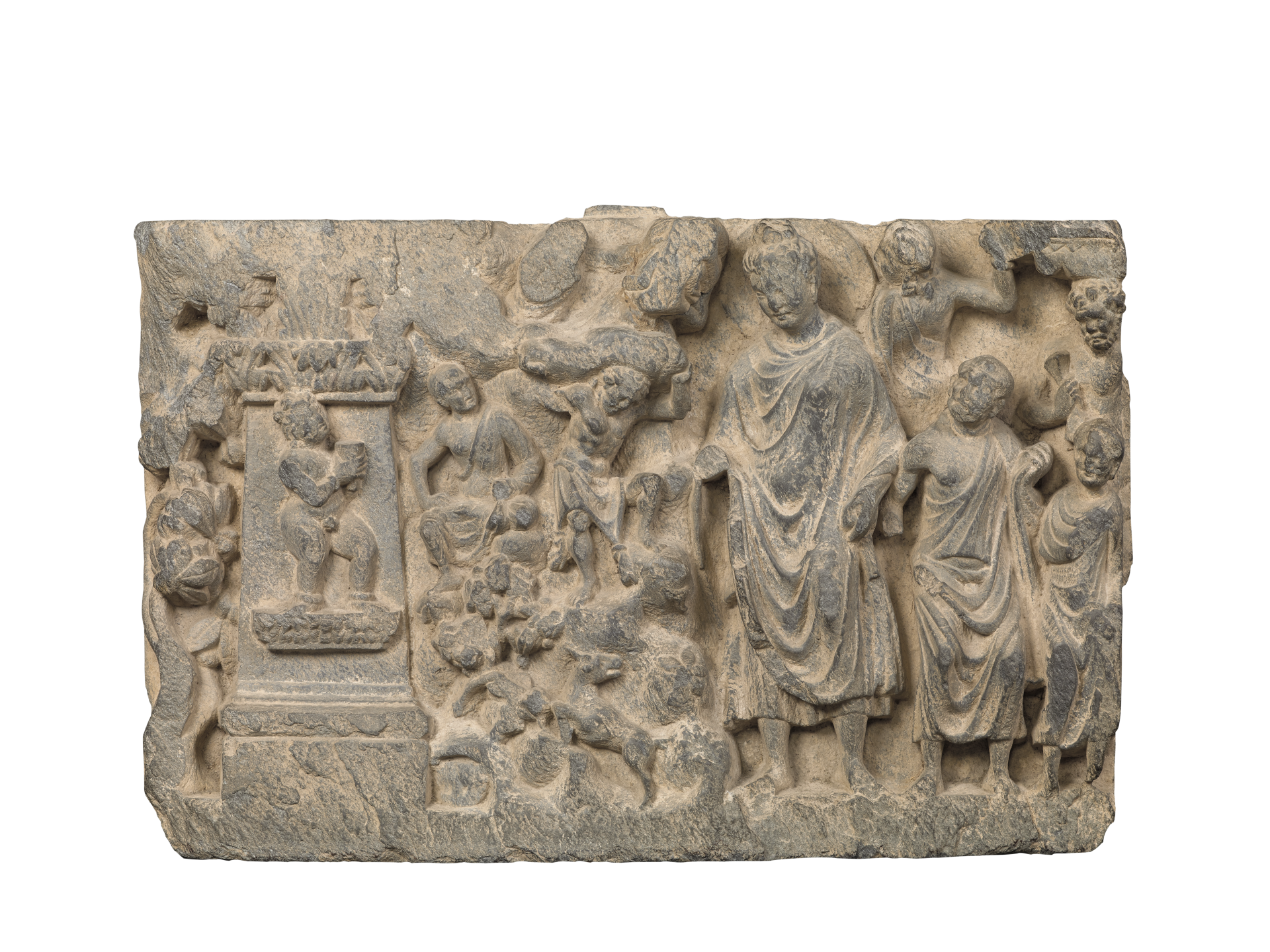 Parables of karma and retribution known as avadānas are important subjects of Gandhāran art. This genre of Buddhist literature is affiliated with nidāna, a Sanskrit term that means “causes of being”. It is associated with the origination of the Buddha’s teachings and the compilation of strict codes of discipline, in addition to being an important connotation of Buddhism in its primitive stage. These parables are mostly about sentient beings, who are able to access the Buddhist Dharma due to the karmic merits accrued by them.

This relief presents two focuses; the left of the scene featuring a Hellenistic pillar and a boy, and the right one the standing Buddha surrounded by a crowd. Both the boy and the Buddha are the chief characters of the scene. The Buddha has an uṣṇīṣa under large wavy curls and a nimbus behind his head. His face turns to our left and looks relaxed. His body also turns slightly sideways. He wears a kāṣāya covering both shoulders. His right forearm which is missing would have been raised to the level of the elbow. The left hand (our right side) is holding the end of the robe.

The four figures to the Buddha’s left (our right side) are larger in size than the rest of the retinue. They differ in appearance and posture, but all are turning around and looking toward our left side of the relief. Their facial expressions are richly diverse; either astonished and hesitant or in pensive mood. To our left of the Buddha is a vīra, a mighty warrior with a robust body and strong muscles. He bares his upper body and wears only a short sampot. With one foot trampling on a boulder, he is bearing another huge one upon his shoulders. Further left is a bhikṣu seated in relaxation posture (lalitāsana), while lifting his head to gaze at the Buddha. The animal running amid mountain rocks beneath these two figures is also turning around to look at the Buddha. The naked boy in front of the pillar to our left is proportionately larger in size. He is holding an alms bowl with both hands. He faces sideways toward the Buddha and his joyous expression suggests that he is there to welcome the arrival of the latter. The entire relief is noted for its rich content, as well as the figures’ diverse expressions and vivid postures.