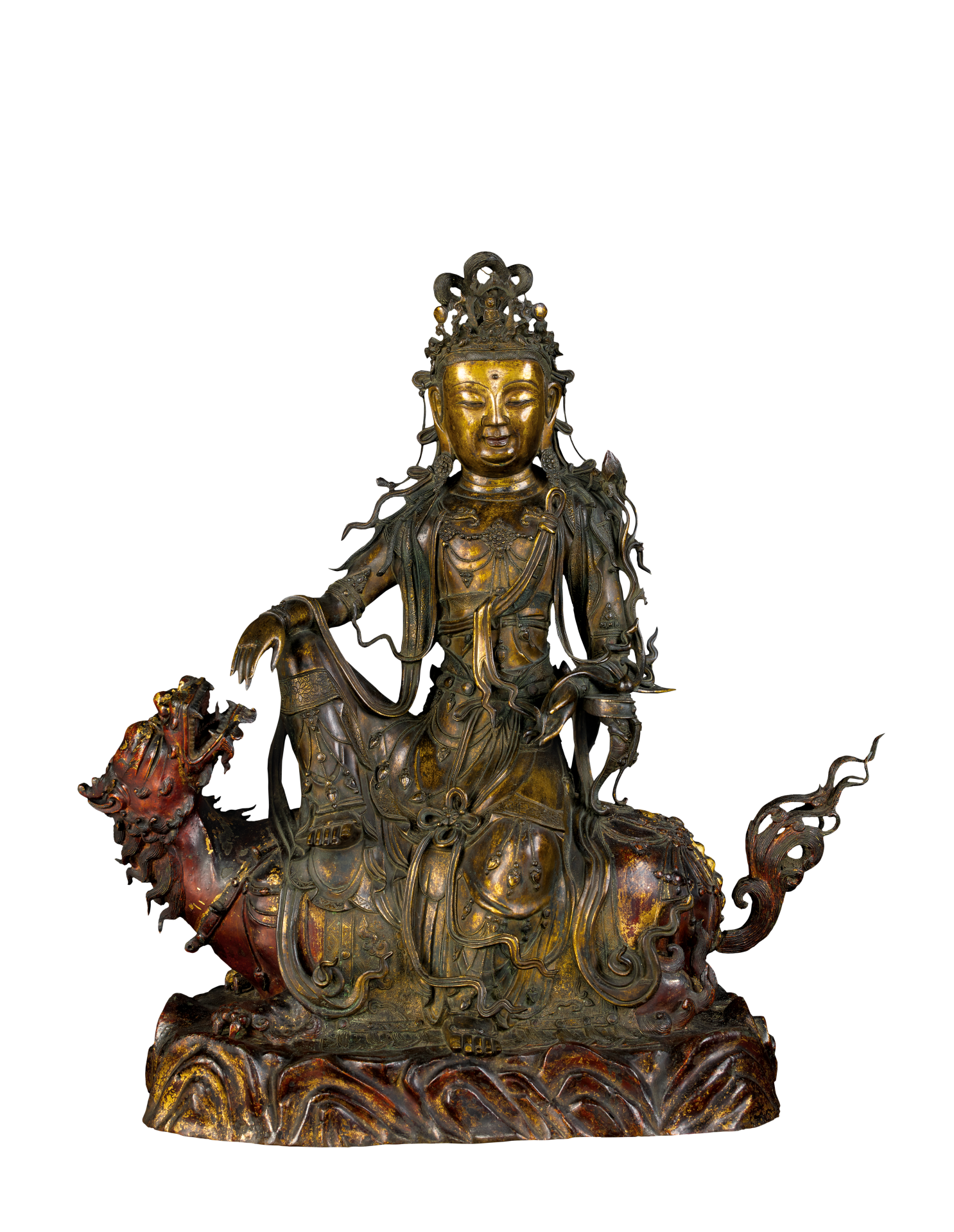 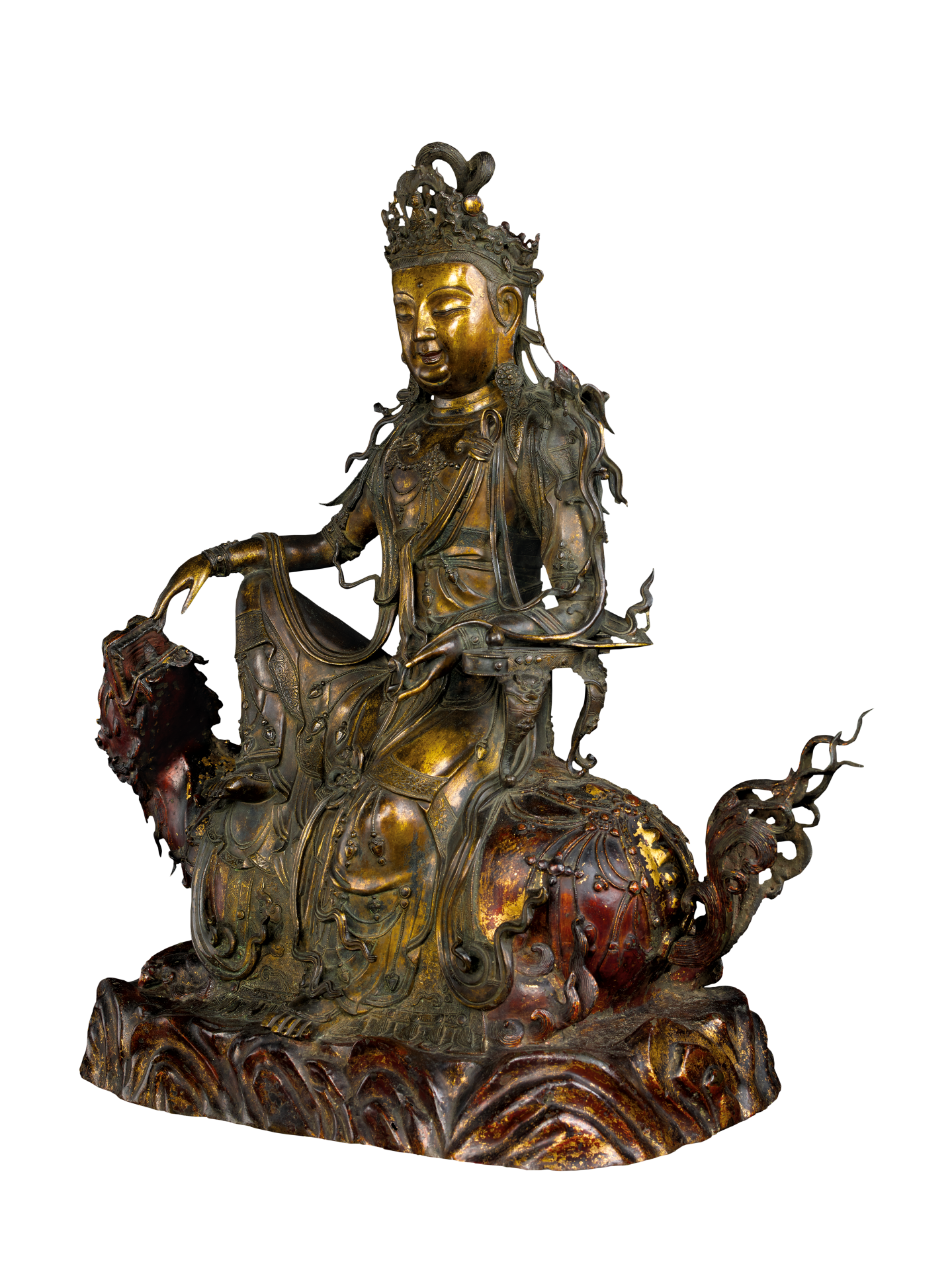 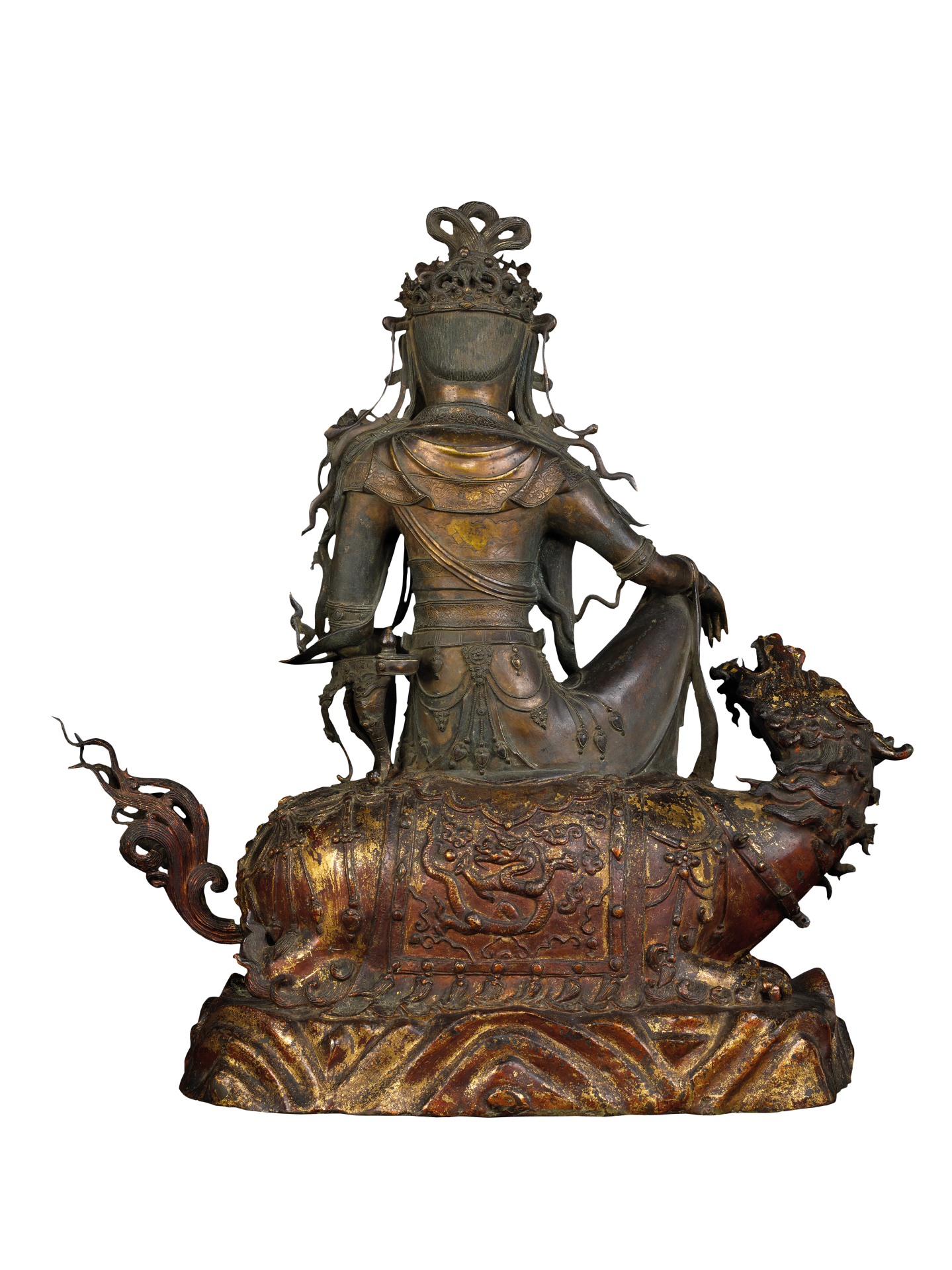 The image showing Guanyin Bodhisattva seated on a ‘lion mount’ is also called Siṃhanāda Avalokiteśvara or Guanyin of the Lion’s Roar. This mount is in fact a divine beast, known to the Chinese as hou. Legend says that this beast was in fact Nāga King’s son. This form of Guanyin is believed to have the divine power of subduing all diseases and sufferings caused by the Nāgas, and delivering sentient beings of the Three Realms (Realm of Sensuous Desire, Realm of Form and Realm of Formlessness) from the ocean of sufferings. The image was quite popular during the Ming dynasty. Apart from appearing alone, Guanyin normally rides a hou, and is sometimes joined by other Bodhisattvas – Mañjuśrī riding a lion and Samantabhadra riding an elephant, to form the Triad known as the Three Great Beings.

This Guanyin statue has an oval face, crescent eyebrows, long eyes, plump cheeks, smiley lips and a benevolent countenance. He wears a triple-lobed topknot behind a crown set with an image of the Amitābha Buddha, a shawl around the shoulders, and elaborate and resplendent strings of jewellery. The garments’ folds twist spontaneously, showing fluidity and elasticity of line. The borders of the shawl and the skirt are chiselled with floral and foliage motifs. The craftsmanship is refined and exquisite. The right forearm rests on the right knee, while the left hand clutches the stalk of a lotus. The statue is seated leisurely in ‘relaxation posture’ (lalitāsana) on the back of the gold haired mythical beast while leaning against an armrest. The lion-like beast has a horn on the head, long wavy mane, an elongated stout body and relatively short limbs. It is crouching on a bed of mountain rock and turning around its head to gaze at Guanyin. Its gaping mouth suggests that it is roaring. The portrayal is very lively and vivacious.

This majestically modelled and meticulously crafted statue attests to the incorporation of even more Chinese characteristic elements into the style of early Ming (1368-1644) imperial Buddhist statuary. It is a brilliant masterpiece of sculptural art of the late 15th century.