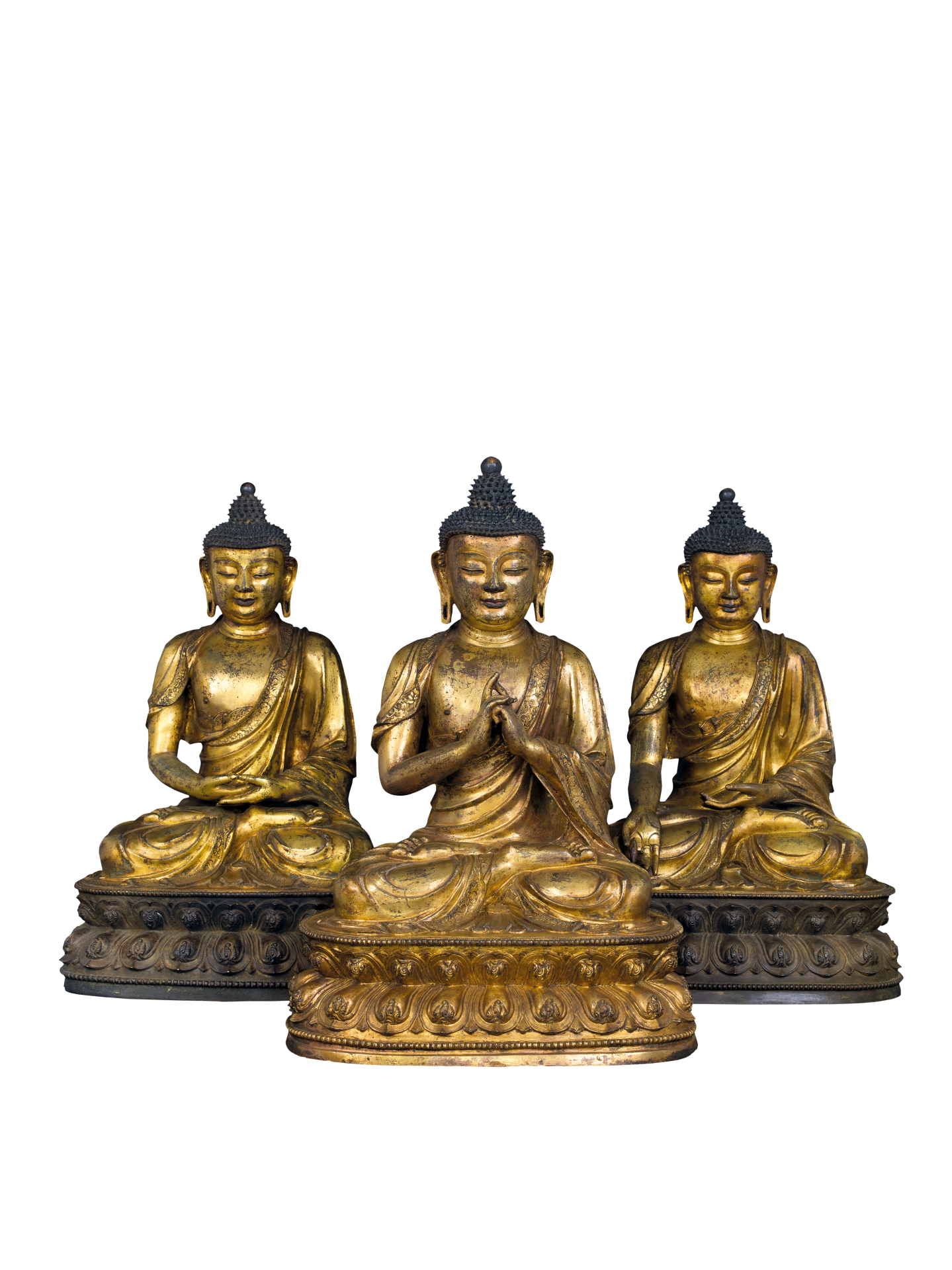 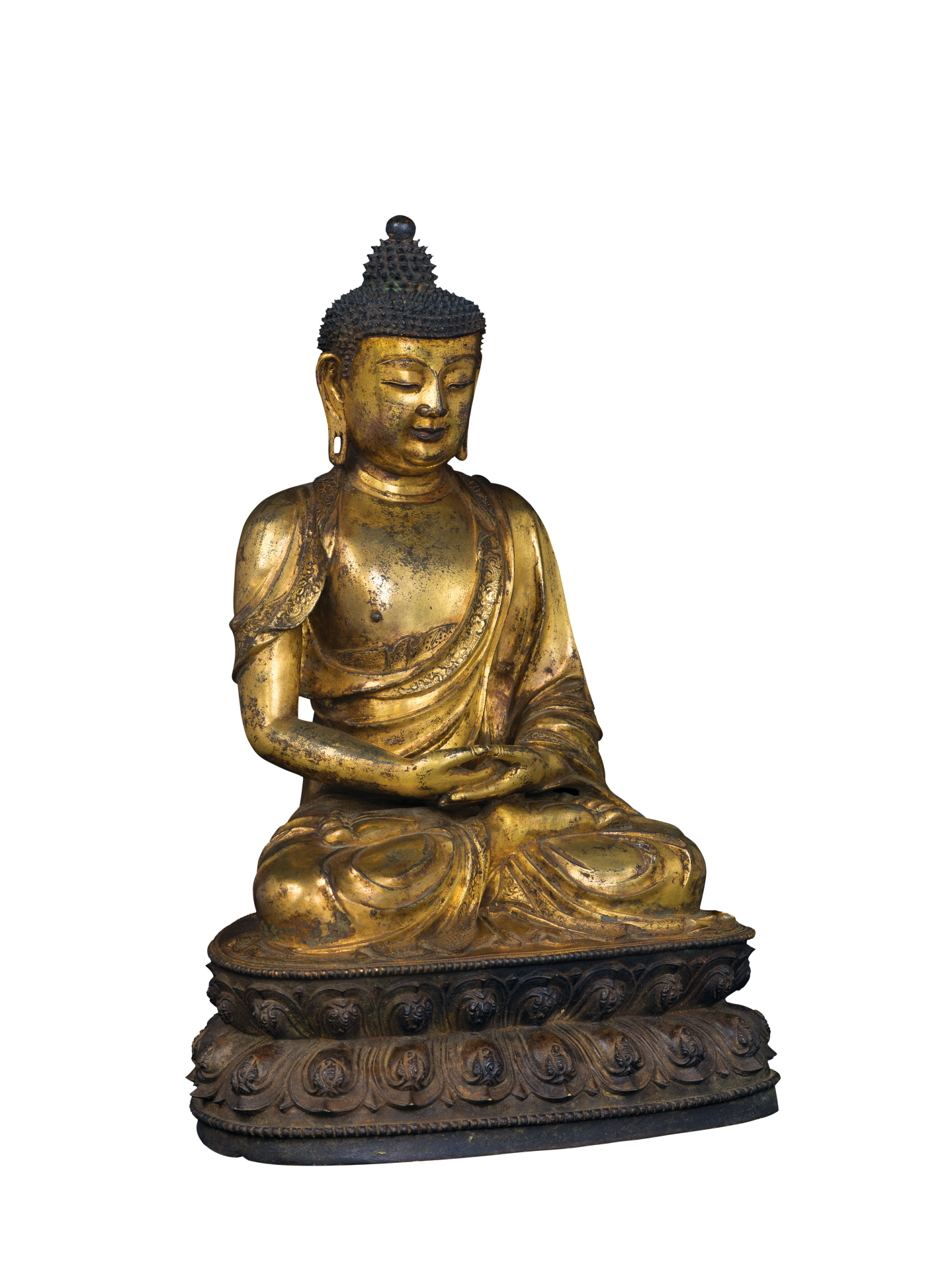 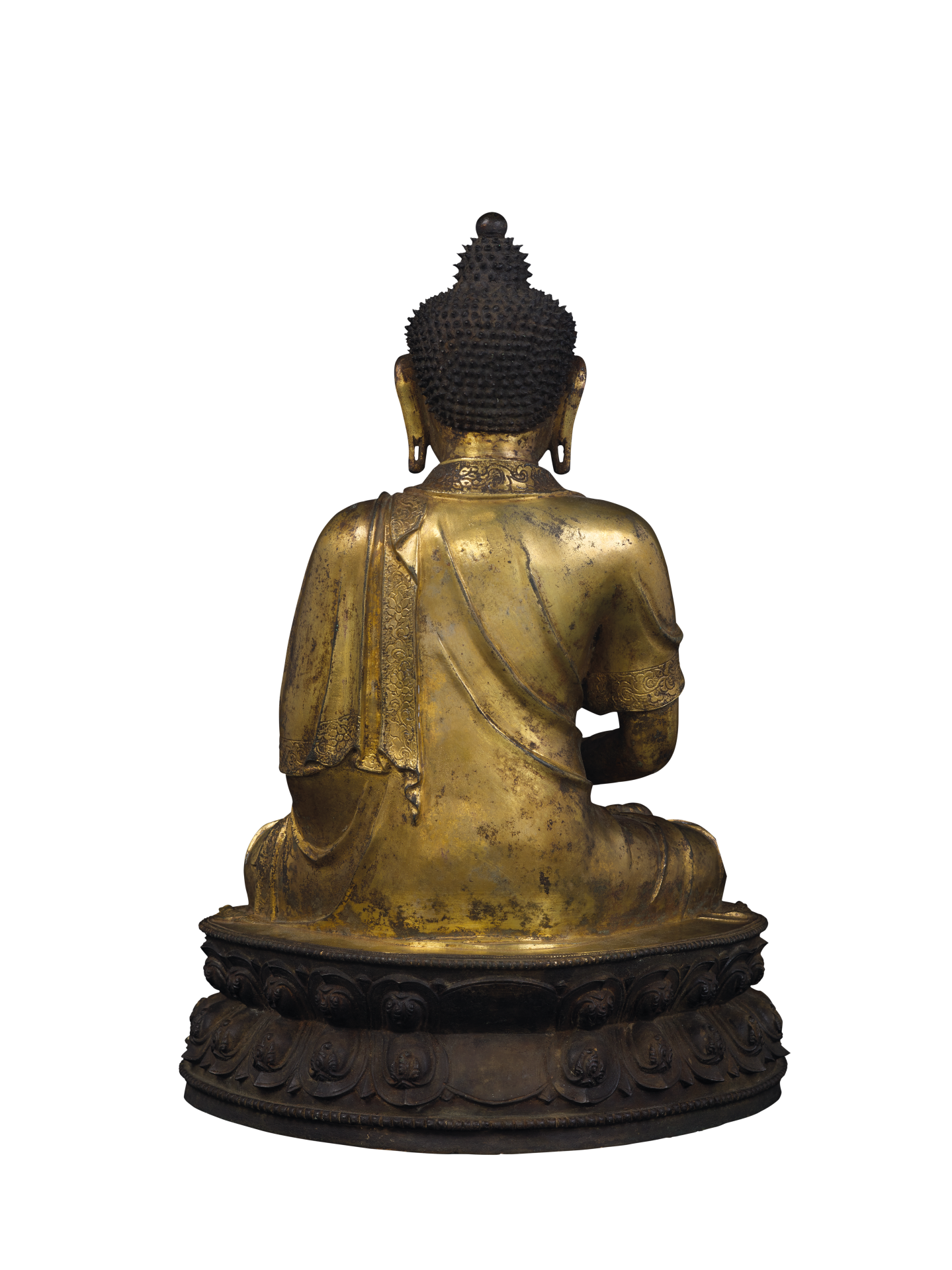 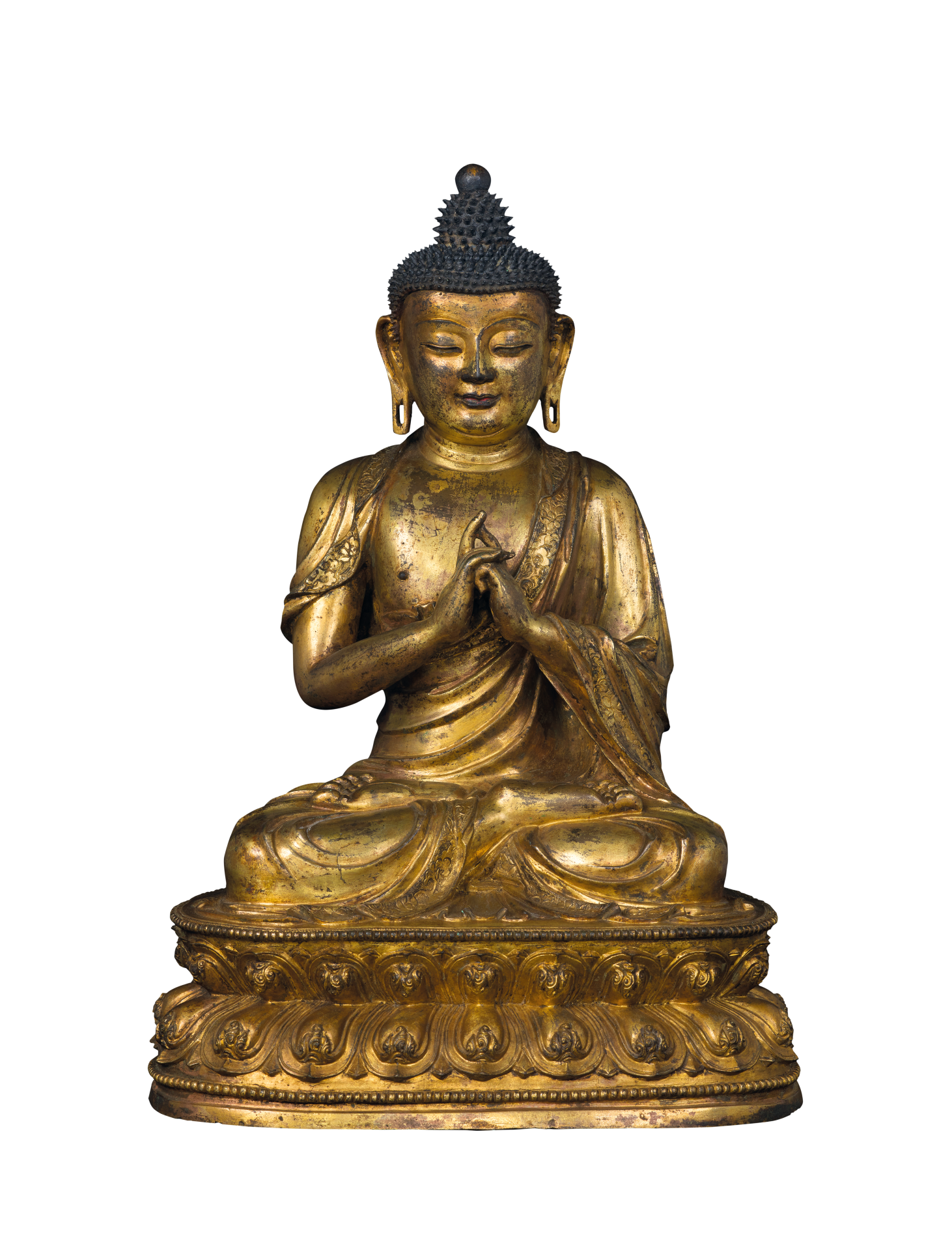 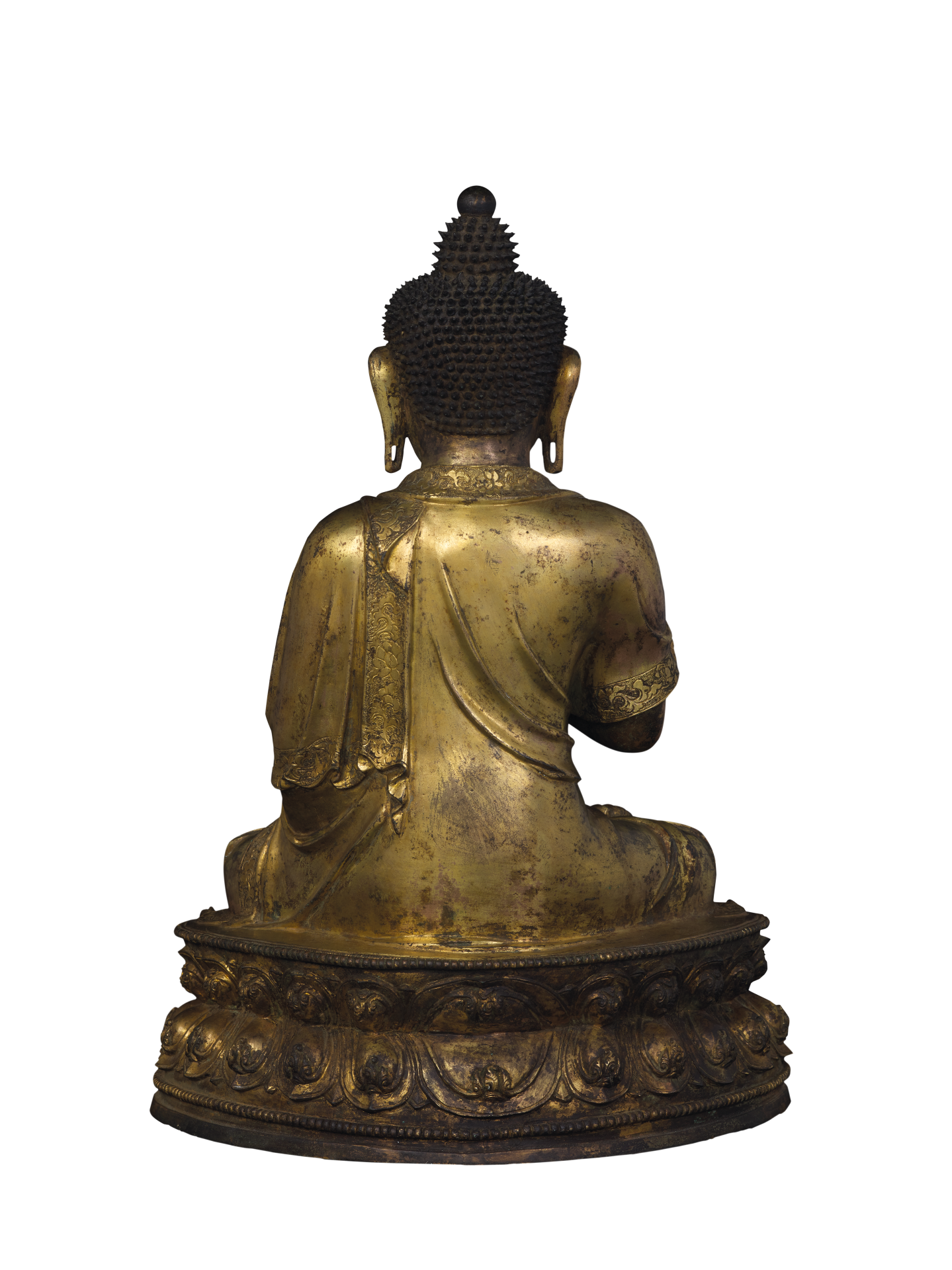 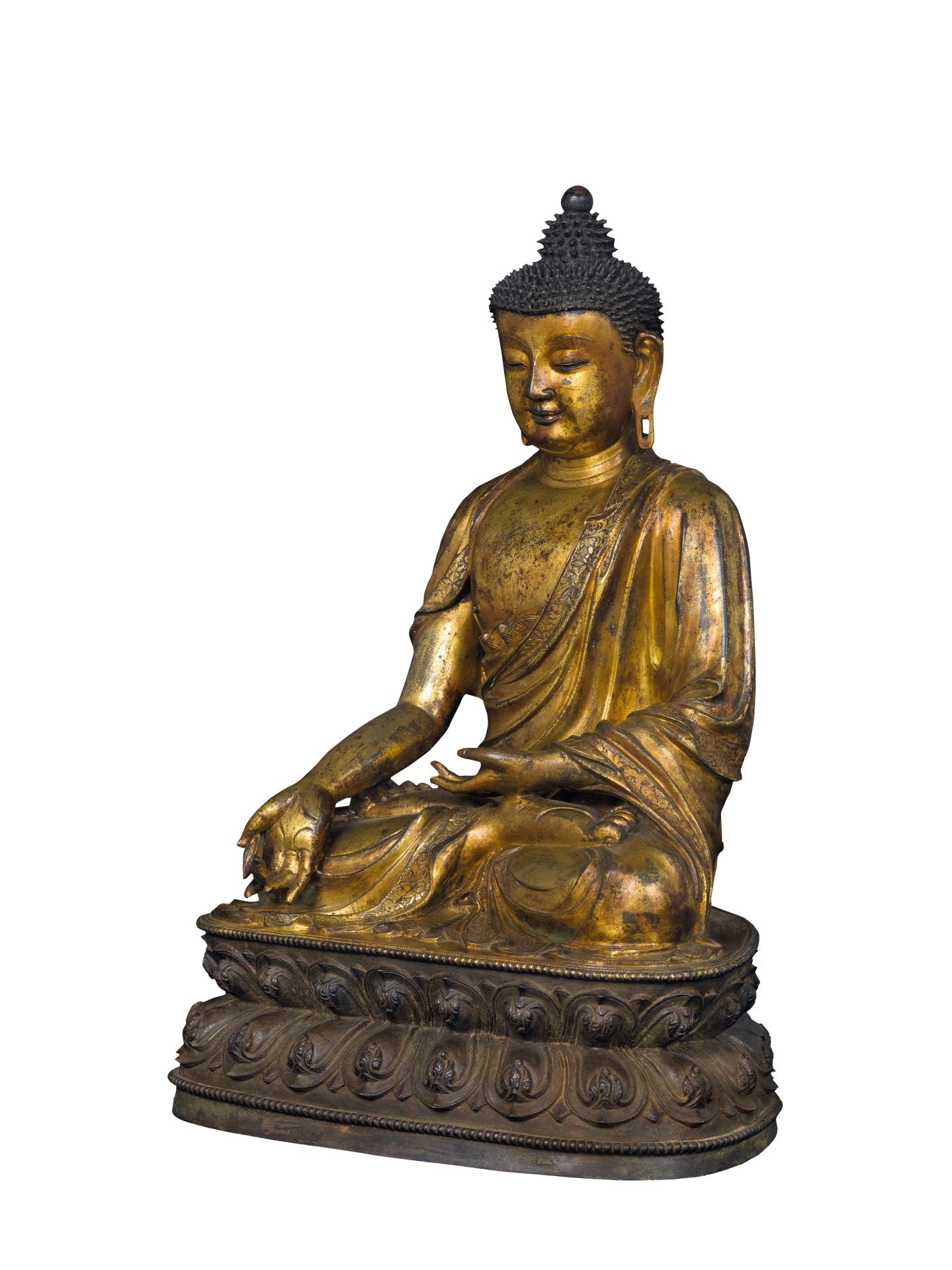 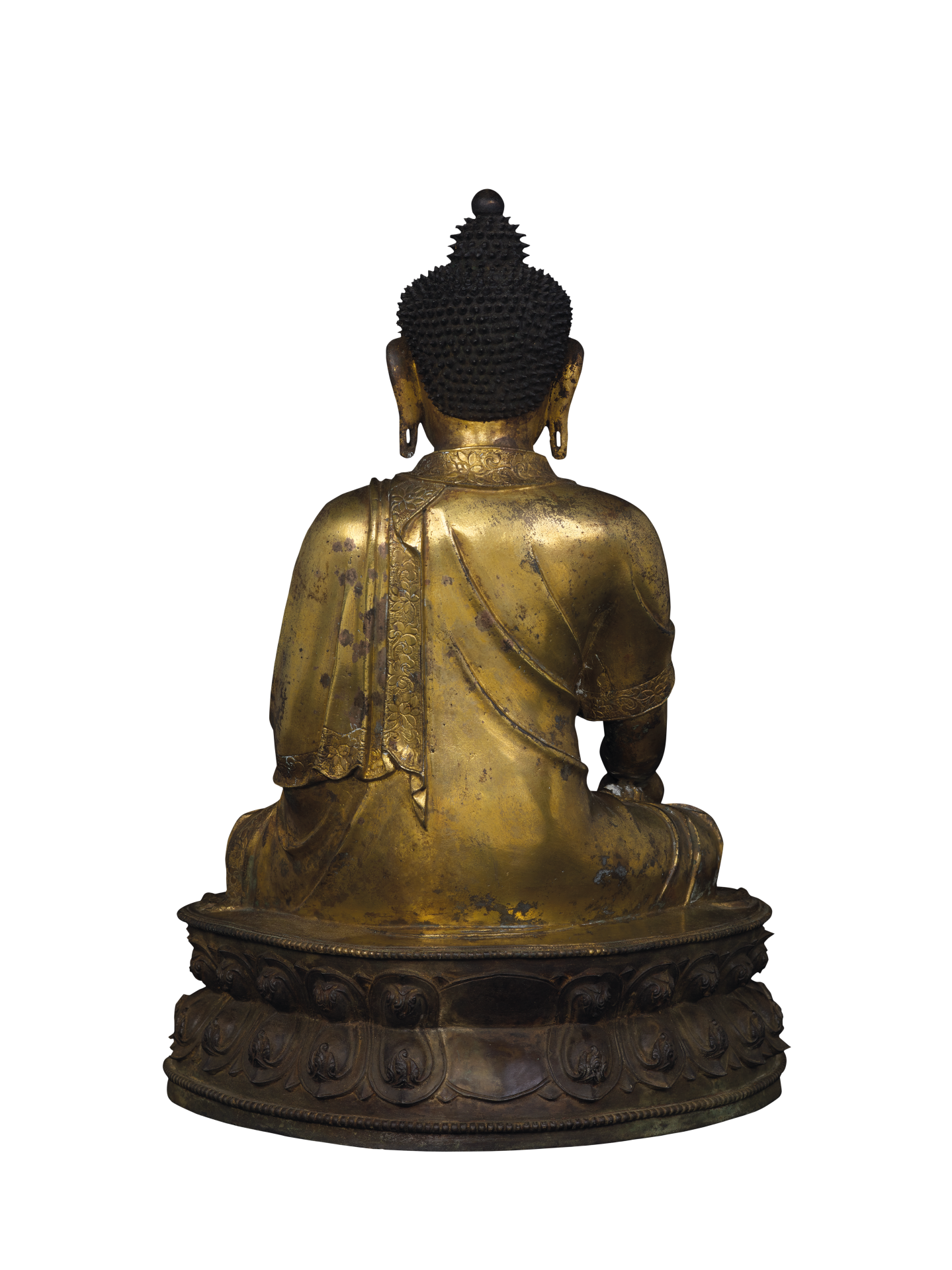 This Buddha Triad of the Ming dynasty (1368-1644) is made up of Vairocana in the middle, Bhaiṣajyaguru the Lord of the Eastern World of Pure Vaiḍūrya, and Amitābha the Lord of the Western Paradise. All three are wearing a kāṣāya exposing the right side of the body, with a corner of the robe covering the right shoulder. They are each seated with legs locked in ‘lotus posture’ (padmāsana) on a double-lotus pedestal. Vairocana’s hands are displaying the ‘supreme bodhi gesture’ (uttarabodhimudrā). Bhaiṣajyaguru’s right hand extends naturally downward and holds a haritaki fruit between his fingers, while the left hand is placed in front of his abdomen in ‘meditation gesture’. Amitābha has his hands locked in ‘Amitabha meditation gesture’ in front of his belly.

Bhaiṣajyaguru is also known as the Medicine Master Vaiḍūrya Light Tathāgata. When he was practising as a Bodhisattva before attaining Buddhahood, he made Twelve Great Vows including relieving the illness and sufferings of all sentient beings, prolonging their life, improving their health, eliminating disasters, and realising Enlightenment as soon as possible. His Pure Land is located in the East. Bhaiṣajyaguru and his acolytes Bodhisattva Sunlight and Bodhisattva Moonlight form a grouping known as The Holy Triad of the East.

Vairocana’s one is particularly fabulous. The ridged folds twist in many different angles. The catenaries undulate with great fluidity and elasticity. The relationship between the folds and the figure is represented with remarkable realism. The lotus pedestal is furnished with thick rich petals featuring flame-like tendrils at the tip. The upper rim of the pedestal is decorated with two concentric rounds of continuous beads showing sequential variations: smaller beads in the inner round and larger and squarish ones in the outer round.

These stylistic characteristics are very similar to the imperial statuary of the Yongle reign and Xuande reign (1403-1435) of the early Ming dynasty. However, close comparison between Yongle and Xuande works reveals that these three statues have a rounder face, a fuller torso, puffier muscles, less contrast between the broad shoulders and narrow waist, though the drapery is more sophistically rendered. Although the hemline below the two legs drape in scalloped folds in an apparently symmetrical layout, the undulation of the fabric shows even greater delicacy. Instead of showing turns with straight edges, the folds are represented by arcs that vary greatly in shape to echo with body posture and to achieve greater fluidity. The borders of the kāṣāya are also chiselled with tendril motifs against a fish-roe background to enhance the exquisiteness and resplendence of the robe.

Due to these characteristics, the style of the three statues were based on the imperial works during the Yongle and Xuande reigns with more Han Chinese elements. They are masterpieces of the mid-15th century.